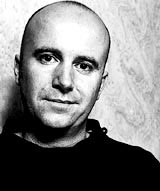 Big ideas are back on the agenda. After a decade of working out what the Internet meant and learning the lexicon of brandspeak, the Noughties have kicked off with some grand themes. Last year the big one was No Logo, Naomi Klein’s well-timed polemic against corporations. This year it’s the turn of SuperHumanism, a British Design & Art Direction initiative spearheaded by Richard Seymour.

No Logo was the slow-burn success of last year. It struck a chord with a loose alliance of disaffected groups, from Third World campaigners to those suspicious of the corporation’s encroachment into every nook and cranny of their lives. “I am not a target market,” sums up the new cynicism toward corporate motives. Klein sucks us in with zeitgeisty commentary on the role brands play in our lives, and ends with accounts of oppression in Third World sweatshops. Powerful, but while much of her critique is sharply written, Klein’s somewhat pious anti-consumerism offers few solutions.

This is where SuperHumanism – “an agenda for change in the design and communications industries” – will hopefully fit in. What began as a gleam in Seymour’s eye is today billed as an international conference set to take place in London on 29 May. It will include Klein among its speakers. While the agenda has yet to be set, it is safe to assume that it will be founded on the central tenets that “it doesn’t have to be this way” and that designers are agents for change.

So what does SuperHumanism mean? Humanism describes a human-centred worldview rather than one based around God or nature. It emerged in the thinking and actions of such Renaissance and Enlightenment figures as William Shakespeare and Voltaire, who championed a critical, rational view of the world and put Man centrestage. To early humanists Man was unique and separate from nature.

Fast-forward to the 21st century and even plain old humanism is under attack. From campaigners who want to give apes human rights, computer scientists who claim human thought will soon be dwarfed by artificial intelligence and commentators who emphasise Man as consumer, not creator.

What has all this got to do with design? We are special and design is one the core competencies of human beings. Neither chimpanzees nor super-computers possess our sense of purpose and intention, nor do they plan and set goals as we do. Only humans innovate and pass their knowledge on to future generations, so that they can progress and build version 2.0. The process of identifying problems consciously, proposing solutions and evaluating them is a uniquely human activity – one that designers specialise in.

A central theme of SuperHumanism is the humanisation of technology. For me, this demands that we go beyond a narrow focus on “users”. We’re more interesting and complex than users.

Take two recent mobile phone trends, the huge growth of text messaging and fashion overtaking functionality as a purchasing priority. A user-centred approach is limiting, as it neglects fashion and most usability experts neglected text messaging as it was too hard to use. We need a richer, more social understanding of human needs and desires.

But what does all this high-minded chatter amount to? First, we should avoid worthy hand-wringing. Let’s not take the world on our shoulders, and be realistic about how much sway we really have before fretting over our responsibilities. Neither should we shrug our shoulders in the face of global business and feign powerlessness – we have more clout than we realise.

We may not appreciate Laurence Llewellyn-Bowen’s sartorial flair, we may find Wallpaper magazine nauseating, some of us might catch the Financial Times’ Creative Business and all of us knew that Cool Britannia was naff. But cast your mind back ten years and it’s clear that design has become mainstream. Design has moved from an obscure personal pursuit to becoming almost the centrepiece of Government policy. Designers are the new role-models, held up to both business and youth as symbols of innovation. So we could use our new-found status to plug the humanist cause.

We don’t have to turn down work to make a mark. Much can be gained from challenging a client’s brief, though we are well advised to have done our homework beforehand. An even more influential role is to get in before the brief has been written and shape the project strategy, which forces us to engage with bigger ideas on a more permanent basis. So let’s think big and shift our attention from individual consumption to world-changing collective creation.