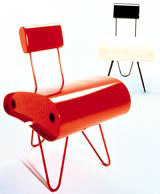 The Milan Furniture Fair is as always a temperamental affair. With most manufacturers still struggling to finalise adventurous prototypes and designers searching for appropriately inspiring names, it is a surprise if even a hint of a preview filters to the media at all. Yet there are some certainties and one is that all the furniture companies will pull out their best shots for what is effectively the industry’s most prestigious launch pad.

Family-run company Driade sets the tone with new designs by an assemblage of excellent names, including architect John Pawson, Philippe Starck, Mario Bellini and Marco Zanuso Jr. Even though it is present at the fair, a visit to its showroom in Via Manzoni is a chance to get reacquainted with old and new classics.

Kartell’s products are still shrouded in mystery, but we will hopefully see a new Piero Lissoni chair and finalised versions of Starck’s Bubble sofa. Moroso will be launching new designs from Ron Arad, Rodolfo Dordoni and Patricia Urquiola. Picking up on the Albert & Victoria Museum theme started last year, Arad will show a new model of the Little Victoria chair as well as an indoor/ outdoor version of Little Albert. Arad will also be heading a group of first-year Royal College of Art product design students, who will show pieces at the Later Nos Gallery in Via Carducci.

Once again, Cappellini will be launching at the SuperstudiopiÃ» space its new collection. For Giulio Cappellini, Lissoni has designed Avio, a shelving system made in honeycomb aluminium, using aircraft industry technology. Claudio Silvestrin will be launching the Soft Wooden Soft Bench and the Waterside bench, both displaying his minimalist clean lines. Swedish architect Claesson Koivisto Rune, a young, prolific practice which is increasingly gaining international exposure, will show TT, a dining table for Units, Cappellini’s kitchen division, and Pebbles, an upholstered seating system. A Cappellini for Corian area will be devoted to designers exploring the merits of Corian, with creations by Marc Newson, Ronan, Erwan Bouroullec and Jasper Morrison.

On the same premises, Ettore Sottsass will show Exercises in Another Material, an exhibition of 14 abstract architectural forms.

British manufacturer SCP will also show at the SuperstudiopiÃ»’s space. Among Sheridan Coakley’s recruits are regulars Matthew Hilton (who will present additions to the Converse range and the Urban outdoor range), Terence Woodgate, Michael Sodeau, Andrew Stafford and Michael Marriott. Proving that the SuperstudiopiÃ» space is gaining a reputation as an alternative fair route, Magis will celebrate its 25 years of activity there, while showing at the fair new products from its favourite trio, Morrison, Michael Young and Newson.

It won’t be only an Italian job though. The Spanish will be out in force, grouped as always under the SIDI consortium (an enterprise devoted to promoting design). Perobell will be launching a new 1960s inspired chair called Menat by Ferran Estela, while Andreu World will be launching Savoy, a new small chair and armchair by Nancy Robbins, as well as Jorge Pensi’s latest Momo chair, launched at Cologne in January. Young American design is confidently represented by the US Surface magazine event, which will show products from ten young designers as well as the latest efforts of Karim Rashid. Finally, two events seem to reiterate the current rage for experimental furniture.

Benetton’s Fabrica exhibition, XYZ Ideas on furniture, which will show “decontextual, amnesiac and genetic design” (at 16 Corso di Porta Vittoria), and the Philips exhibition Smart Connections will explore the research on new technologies and their effect on daily life.

A definite trend towards using conceptual furniture as a forecast of our future way of living can be noted. If this will escalate into virtual furniture fairs remains to be seen.