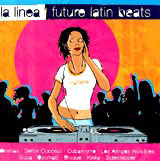 These include La Linea – Future Latin Beats, produced in conjunction with the Royal Festival Hall’s forthcoming Latin Music Festival, which runs from 5-25 April.

It also incorporates a silhouetted crowd dancing in the background.

The three remaining titles are Indestructible Asian Beats, Chico Buarque and Sacred Souls, which is a collection of native American music.

The cover designs complement the intended accessibility of the music, adds Caro.