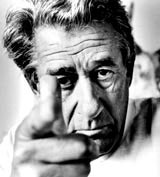 Designed by Windpower, the show runs from 10 May to 8 July and will feature about 200 images, over half of which are works from the 1990s.

Newton achieved international fame in the 1970s working for French Vogue, yet the majority of his work is shot on the streets or in interiors, rather than controlled studio environments.

Of Work, he says, ‘I hate the word retrospective… you can do that when I’m dead.’