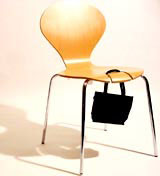 Having laid down the gauntlet to designers in its report Cracking Crime Through Design (DW 23 March), the Design Council shows the consumer that they must look to the designer to provide greater security for their consumables.

Cracking crime through design is more than just a statement of intent from the Design Council. It is a message that the Home Office is looking at more creative ways of tackling the UK’s £60bn crime costs per year.

Criminologist Ken Pease, who wrote the report, believes, “The design challenge is to incorporate crime reduction without sacrificing aesthetics and ease of use.” The Commissioner of the Metropolitan Police Sir John Stevens sees it as an investment into the “science of crime reduction”.

But is it just creating a new obstacle for criminals to work around, or is it a legitimate issue for the industry to embrace. PSD Associates is well placed to comment on the implications of crime through its work with Adshel, where vandalism to its bus stop advertising systems is a regular occurrence.

PSD director of environment Barry Jenkins sees that “crime and vandalism tends to always exceed expectation and any forethought that you may apply to the design of the product in the first place”. However, he agrees that this is a growing social concern for all. And Design Council chief executive Andrew Summers emphasises, “I don’t think anyone’s happy about the automatic response of throwing more police at it or making more prison spaces available.”

The report is part of the Design Against Crime programme developed by the Design Council and funded with £500 000 from the Home Office (DW 8 December 2000) to assist educators, design professional and related businesses in embracing the role of design against crime.

Part of the initiative is to encourage an early response from student designers, even creating awareness as part of the National Curriculum’s design and technology courses. “We want it to be second nature to students when they design anything,” says The Royal Society of Art’s head of design Sue Hewer. “Think crime and put that into their designs.”

This is the second year of the special crime-related project within the RSA’s Student Design Awards. Last year Angelika Seeschaarf’s winning bicycle design featured a saddle that folds back to lock into the back wheel and prevent criminals from riding off with it. Though well received, it has yet to go into production.

The RSA is not alone in recognising the relevance to design education and Central St Martins School of Art & Design senior research fellow Dr Lorraine Gamman has produced a CD-Rom called In The Bag, as a research source for design professionals interested in this area. She regularly works on projects with the school’s students that creatively explore this issue.

But it’s all well and good having an abundance of creativity in design, if these ideas are not put into production, as their value is lost. And as Seeschaarf’s bike compounds, this may well prove the bigger challenge for the Design Against Crime initiative.

Manufacturers have a vested interest in the loss of goods, as Gamman confirms. “Crime is a more voracious form of profit than even fashion,” she says. Gamman continues that one of the results of theft is that, “manufacturers make loads of money when people replace things”.

There is also the obvious cost consideration in making security additions to products, and manufacturers are often reluctant to add it because the market is so competitive. Gamman sees a benefit for the manufacturer through added value for customers, because “if you get a product that looks after you, you go back and use it again”.

The design industry cannot mobilise action on its own, and this is part of the bigger picture for the Design Against Crime initiative.

And the consumer must bear some responsibility for the security of its possession. Factory Design managing director Adam White says that some people are always having things nicked. “It’s more to do with behaviour than the nature of the device,” he says. And Jenkins believes that “it all comes down to good dose of tender, loving care”. If something matters, be it a bike or a building that has been stolen or damaged, it will provoke a response.

And nowhere is the link between consumer dissatisfaction and increased security measures better illustrated than in the car industry, where security is a natural part of the vehicle design process.

Summers confirms that “the Design Council wants this to be consumer led”, and believes that the key is to get retailers on board. ” If they start saying this is an interesting area we can help our customers with, that will put pressure on the manufacturers,” he says.

But there is a balance that needs to be maintained and car production makes the point. “You see higher waistlines, smaller areas of glass so you can’t see in, it’s more like driving urban tanks around,” says the RCA head of vehicle design Dale Harrow.

He continues, “We’re losing social integration, transport is moving away for the ordinary man on the street and actually pushing them away.”

Designing secure products does not need to equate to crude additions that create a Fort Knox-effect, as Gamman has found. “Most designers think that security design is the work of amateurs and incompetents,” she says.

Summers believes that consumers and manufacturers alike will respond best to good examples of what design can achieve. An anti-theft chair that incorporates a place to hang a bag at the front has been developed by Central St Martins’ research project. So Summers can relate reactions directly from it.”People have said that’s fantastic, why didn’t we think of that before. It’s very simple and a good advertisement for design,” he says.

Hanging on to clients is a key to success