EGO Hair Salon, by IS Architecture and Design 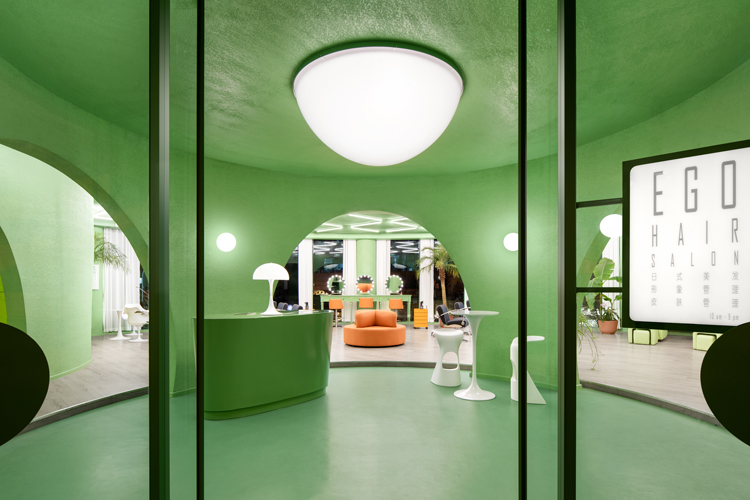 IS Architecture and Design was briefed to turn a disused gym into a space age hair salon. One of the most striking things about this project is the use of green floor-to-ceiling throughout, which as the studio points out creates an “abstract space”. This feeling is complimented by looming archways that create “a space shuttle-like hub” and an oversized ceiling lamp which acts as an “artificial acrylic sun”.

Juxtaposed in the space-age space are several more “natural” elements like palm plants and cacti. Fabrizio Gurrado, the designer behind the space, says the inclusion of natural elements against the futuristic backdrop alludes to the idea of the space being “a new Noah’s Ark, that saves and preserves [plants] towards a new alternative, a near and better future”. The idea is in part inspired by IS Architecture and Design’s research into pollution and climate change, which has them imagining “alternative world’s and ways of life”. 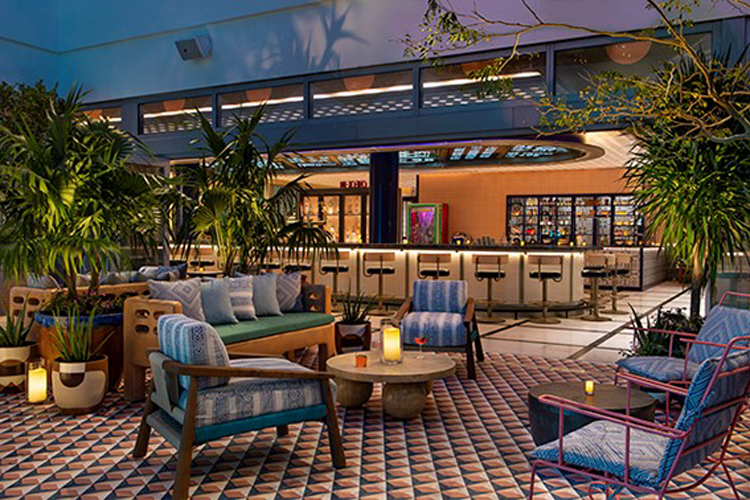 Moxy South Beach Hotel, located in Miami, Florida, has been designed by New York-based Rockwell Group. The design for the 202-room hotel has been informed by the many facets of “Miami culture” and history, the studio says, including things like 1950s glamour and romantic cruise travel. The result is a maximalist set of spaces which Rockwell says “celebrates the spirit of carefree sophistication”.

Several site-specific installations have been designed as feature points. These include Bar Moxy, the focal point of the ground floor lobby. This area features an infinity mirror installation which contains the phone number of El Floridita, the legendary Havana bar, and retro-inspired swivel bar stools. Further up on the rooftop terrace, Brooklyn-based artist Edward Granger has been commissioned to create a “multi-faceted, custom ceiling mural”, which can be found underneath the canopy. Its bright colours and shapes are a reference to Wynwood, Miami’s thriving street art scene. 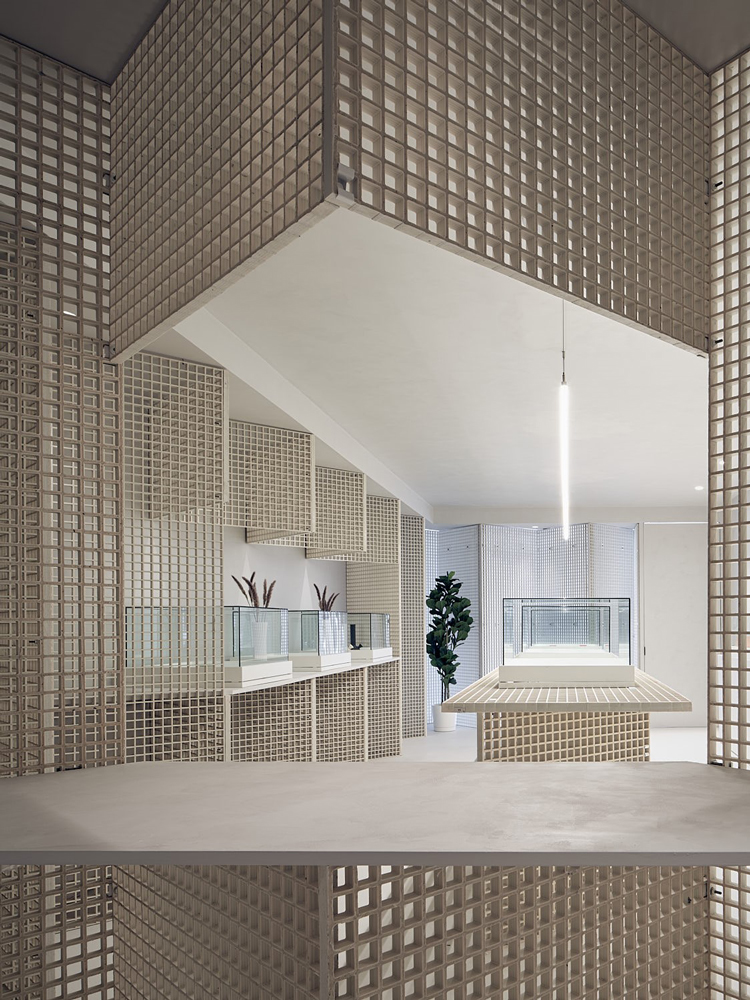 For luxury Canadian cannabis brand Edition, a quick click-and-collect tweak early on meant that the lockdowns imposed in the country were not bad for business. In fact, the company has just opened its second location while still under lockdown, with Toronto-based StudioAC designing the interiors for both the flagship and this new store.

The main feature of the space is the industrial fibreglass and cement grates which form Edition’s shelving and table centre pieces. On the walls, these are positioned at 90-degree angles, thereby promoting a “geometric rigor” throughout, according to StudioAC founders Jennifer Kudlats and Andrew Hill. Additionally, the team utilised this second location’s natural lighting, which the team says acts as a “natural spotlight” for the curated cannabis products on display.

The Wellhead Bristol, by Liqui Group 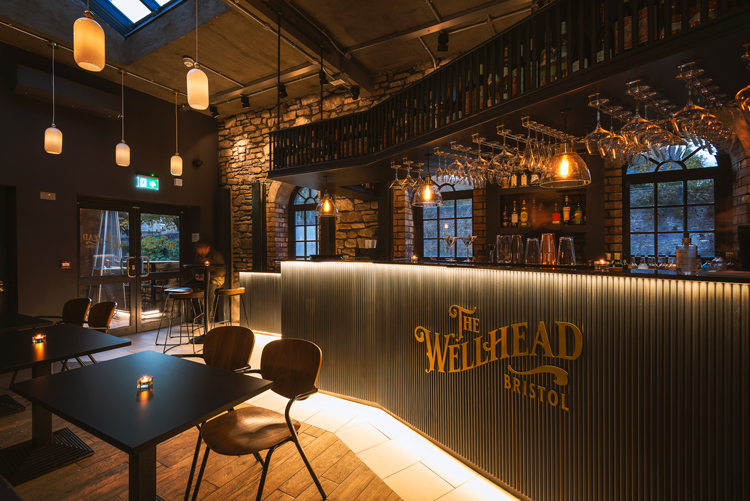 Located in the recently developed waterfront quarter of Bristol city centre, the listed Wellhead building was built to draw water from the docks for use in the brewing process at Georges Brewery, a former 18th century Bristolian establishment. Now, it is the site of a new coffee and cocktail bar, designed by Liqui Group. The new interiors retain the building’s “original fabric”, so revellers will be able to see its exposed brickwork and arched windows – but to soften the building’s industrial aesthetic somewhat, the team has added greenery to the interior and exterior.

It was, according to the consultancy, a relatively awkward space to design, with a small interior space and an indoor-outdoor layout. For this reason, the team says an emphasis was placed on “space planning in order to achieve a practical design flow”. A bespoke angular coffee bar counter was designed to overcome this, as well as a selection of seating and table options including chairs and stools, counters and tables. Overall, the studio says the design is a testament to its belief in “simple, honest and functional design”. 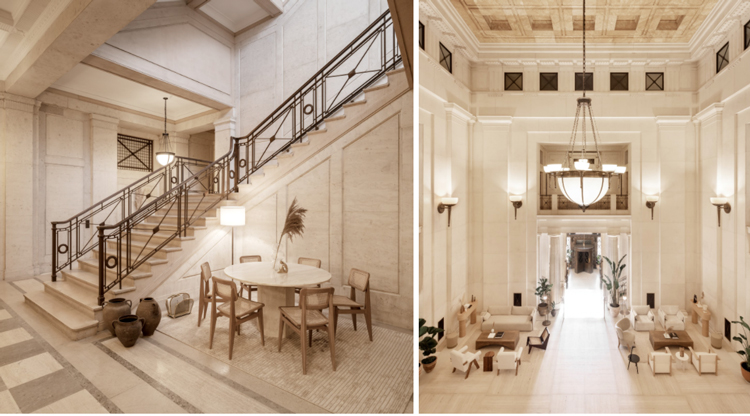 Sat in the heart of Bloomsbury, Grade-II listed Victoria House will take on the next chapter of its history as office space, designed by workspace brand LABS and London-based studio Hutchinson & Partners. The reimagined space pays homage to the original 1920s design and its restoration in the early 2000s, with a look that features “layers of history”.

The grand ground floor lobby and triple-height central hall are among the most striking features for the space. The entrance hall is light and spacious, made so by towering Portland stone columns, and walls carved from Subiaco marble and Italian travertine. LABS and Hutchinson & Partners have replaced the floating glazed platform introduced in the 2000s-era restoration with a monolithic terrazzo alongside travertine slabs. This is a reference to the old travertine floor and the new modern take has been laid out to align with the grid from the ceiling. Bespoke to this project, the terrazzo takes inspiration in colour and form from the old stone of the building – a nod to the old and the new.

Sports Direct rebrands in bid for inclusivity and equality