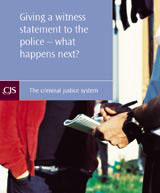 Bell Design is to brand Home Office literature aimed at helping the Criminal Justice System present a more welcoming face to victims and witnesses of crime.

The project encompasses print material, a photolibrary and exhibition panels. The branding will also feature across all future literature produced by a raft of related departments and bodies, including the police force, the Lord Chancellor’s Department and the various judicial services.

The first manifestation of the work is due in early June in the shape of a leaflet entitled Giving a Witness Statement to the Police: What Happens Next? (pictured).

Bell creative director and project head Simon Hall says a non-sensational approach was core to the brief. ‘We didn’t want images of robbers climbing through back windows,’ he says, ‘so we’ve used positive images of people enjoying their environment and feeling safe.

‘We’ve also used abstract crops to avoid focusing on any specific ethnicity or gender that could lead to misinterpretation or calls of stereotyping.’