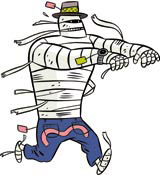 While at London’s Royal College of Art, illustrator Jason Ford was labelled ‘unteachable’ by his tutor David Blamey. Something of a veiled compliment, it wasn’t that Ford was over-indulging in the wayward temptations of student life, it was just that, as Blamey pointed out, ‘You know what you want to do.’

Since age 15 Ford had had a pretty good idea, informing agog career teachers that when he grew up he’d like to be a cartoonist. Inspired by ‘silliness’ and a major fan of Tintin, Ford has, over the years, honed his own distinctive style out of the graphic language of comic books, inventing cute, kooky, and by turns sinister characters and depositing them in surreal, colour-saturated environments to deal with various inexplicable and absurd situations. Disputing the ‘retro’ tag, Ford says, ‘My characters are from a more innocent time, but not any specific period; the style is based on classic comic book language that doesn’t really date.’

Admitting that he found being surrounded by ‘so many talented people’ at the RCA a bit off-putting, thinking he should inject a note of ‘gravitas’ into his work, it wasn’t until he graduated and began getting commissions that he realised it was okay to indulge his silliness – ‘I’ll draw anything,’ he proudly admits.

You’ll find Ford’s cast of improbable characters gracing the pages of The Independent and The Guardian, on book jackets for, among others, Egmont Books’ new edition of Enid Blyton stories, and in the prestigious calendars produced by design group Trickett and Webb; a bedraggled Batman drags on a pipe, King Kong shows off simian-style tattoos, while a bemused pup paws at his anti-scratch collar-cone.

Last summer an exhibition of Ford’s work, Rogues Gallery, at Pentagram highlighted the humour and pathos inherent in some of his most iconic creations. Twelve larger-than-life portraits were isolated on a white ground, dismembered by the edge of the canvas. Away from the chaos of the printed page and the ‘safety’ of a commissioned brief, it’s as if these ‘half-heads’ peer from their world into ours.

Welcome input came from Pentagram’s Angus Hyland (who programmes the gallery space), as Ford readily admits, ‘I go to pieces without art direction’. When presented with a cast of characters Hyland was keen on the heads that looked least like they were cropped from existing illustrations, and, says Ford, that prompting gave him ‘the balls not to be scared by white space because as an illustrator I’m paid to fill that space’.

Now the accompanying catalogue, designed by studio-mate Jason Godfrey, has been nominated for a Silver D&AD Award in the Illustration Series category. Explaining why he entered the handmade, limited-edition catalogue for the competition, Ford adds, ‘I think illustration gets a raw deal in design competitions, and this catalogue offers a different way of viewing it.’

In the catalogue, the final acrylic-on-canvas images appear alongside sketches and drawings. Godfrey also took studio photos to demonstrate Ford’s working methods, which feature colour palettes improvised from found sheets of plastic, outlines photocopied on to acetate, the overhead projector and his easel. The entire assemblage was produced on a desktop printer, using pulp-coloured sugar-paper, the stuff we all used to paint on at school.

Godfrey proved himself a valued collaborator as his design for the exhibition invitation, featuring the bisected head of King Kong, provided Ford with the clinching idea for the exhibition The Peeking Characters with just two weeks left to paint 12 canvases. ‘It took a designer to put a box around it,’ admits Ford.

Ford shares a 418m2 studio in Dalston with a gang of graphic and interior designers, architects and photographers, illustrators including Ian Wright and Marion Deuchars, and the illustration agency Heart, which has represented Ford since its inception in 1994. There is always company around and Ford, which is just the way he likes it.

So, if he wins the Silver D&AD pencil, how will it affect Ford’s career? With a giggle he contemplates the scene, ‘Well, on the night I might treat myself to a cab home, and then rearrange the shelf in the toilet to make room for it.’