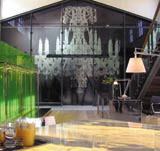 It’s four months since Eurostar’s business class lounges won Best of Show at the 2003 Design Week Awards. Since then, the only addition to the London lounge is a vibrating black leather massage chair that is lurking, unused, behind a screen.

The chair amuses Richard Hill, Eurostar’s surprisingly youthful design manager, but he is clearly proud of the lounges, and with good reason. Designed by GBH and Starck Design, they are airy, comfortable and humorous. You can charge your mobile phone, eat, drink and relax, away from the excitable hordes in the standard lounges outside.

I meet Hill the week Eurostar postpones the launch of its new train interiors, also masterminded by Eurostar’s artistic director Philippe Starck. They are finally unveiled in Lille this week.

Vibrating chairs aside, Starck’s aforementioned humour – translated by GBH into features such as a giant wardrobe decorated with security X-rays of luggage (only the keenest eye will spot the spanner stuck inside the tuba) and blown-up graphics of chandeliers – is one of the few things to get Hill animated.

Affecting a French accent, he describes the way Starck has been known to brief designers. ‘He will say: ‘I want it stylish, chic and with a sense of ‘umour’. And that can be as in-depth as the brief goes,’ explains Hill.

As Eurostar’s artistic director, Starck’s key role is to provide ‘clear creative direction’ to the in-house and external designers working with the company. Hill denies it’s just about hiring a big name. ‘It’s not as calculated as that. Starck was hired on the strength of his personality and not his name.’

Hill arrived chez Eurostar at an auspicious time. GBH was appointed just before he joined and started work with him in January 2002. To be garlanded with an award barely a year later must have been a real coup. If it is, Hill doesn’t show it.

With responsibility primarily for graphic design, he manages both the internal and external design resource, meeting GBH once a week. He liaises with Eurostar’s product team, responsible for passengers’ experience, and its project team, which realises the environments. The design team, Hill says, sits somewhere between the two.

Eurostar’s unique position as the channel tunnel’s train operator means it has had to innovate from the start, believes Hill. ‘Eurostar has created a new market, we’re not just fighting for market share and battling with low-cost airlines,’ Hill claims.

‘We’re tuned to change because we are an innovative company. We have had to stay one step ahead [of the market],’ he says, rather dutifully trotting out the Eurostar line.

Airlines are Eurostar’s stiffest competition, even though, city centre to city centre, Eurostar is a faster way to travel. More importantly, Hill believes, Eurostar wins hands down on providing the best experience.

‘Air travel now is all go, go, go. With Eurostar, the travel is seamless and is part of your break. Business travellers can work in peace, and leisure travellers can immerse themselves into their holiday gradually,’ he says.

Hill’s claims of innovation could come from any design-focused company, however, even compared with airlines’ own lounges, Eurostar can probably feel confident. ‘Our lounges are fresh. The design is accessible; we’re not trying to alienate people with high design,’ he explains.

They are also designed with different audiences in mind. A Parisian’s view of London is different to that of a Londoner, and Eurostar has to offer a certain knowledge of each location, Paris, London and Brussels, Hill says. His job is to maintain their different perspectives, but ensure they are aware of each other.

Lounges are an excellent blank canvas on which to project creative ideas, but narrow train carriages are a different prospect. Can Eurostar translate its successful design elements from a spacious lounge into the trains themselves?

Hill believes it can, but says ‘we’re only part way there’. ‘The end result is not set in stone. The new carriages [unveiled this week] are just the hardware, the software will follow,’ he says, not wanting to give anything away.

According to Hill, the ‘software’ offers the best chance to showcase Starck’s vision and humour. ‘Humour can be added to menus, for example,’ he says. But probably not timetables, the design of which take up the majority of the in-house team’s time.

Comparisons and competition with airlines means that Eurostar can be helpfully removed in traveller’s minds from associations with the UK’s woeful rail service. ‘People don’t lump Eurostar together with trains. They recognise Eurostar as the way train travel should be,’ Hill claims.

Anyone who’s been frustrated more than once by cancelled Eurostar trains, this writer included, may disagree. But with the planned high-speed Channel Tunnel Rail Link to St Pancras, scheduled for completion in 2007, aiming to shave at least half an hour off the current three-hour travel time, and redesigned carriages and award-winning lounges, perhaps Eurostar can yet inject the romance back into rail travel.