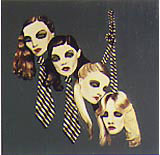 British fashion designer Simon Thorogood shows an installation of 3D images, blending together digital art, fashion and music, on 30 November. Tenth will be shown from 1pm until 10pm as part of the Fashion in Motion series.

Mark Wallinger shows an installation of time, travel and spirituality at No Man’s Land, until 13 January 2002. Wallinger moves away from his earlier work grounded in British popular culture and into spiritual iconography.

Britney Spears, Jennifer Aniston, Courtney Love and Madonna are among the stars to come under the subversive gaze of Madame X and the Party Tricks, until 21 December. British artist Dawn Mellor’s alter ego Madame X conjures up seven images on the relationship between the cult of celebrity, the fan and criminality.

Dutch architect DRMM and designers and tutors of the Intermediate Unit 4 at the Architectural Association present a selection of work at Off the Shelf until 5 December.