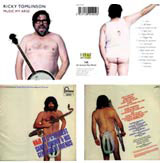 What is it about naked geezers and album covers? No sooner had we recovered from Ricky Tomlinson’s recently launched CD Music My Arse, than graphic designer Claire Furnish sent the picture of Scots jazz man Sandy Brown & His Gentlemen! Friends. The 1968 album Hair at its Hairiest reminds us there’s nothing hairier than that which lies under a sporan.