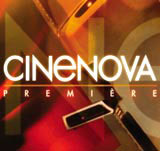 Dutch film channel CineNova has been given an updated brand identity and a series of new idents by Kemistry for a £100 000 fee.

The revamped look will air from 1 December. CineNova is a premium pay-TV channel devoted to feature films that broadcasts 24 hours a day in The Netherlands and parts of Belgium.

The brief, according to Kemistry marketing director Guy Hewitt, was to reposition the channel. ‘It was seen as a family channel that was slightly downmarket. Part of our job was to shift it in terms of its perceived value,’ he says.

The consultancy has created nine idents as well as channel promotions, on air straps and ‘coming next presentations’. The work covers all CineNova’s main genres, such as comedy, romance, horror and thrillers, plus special event sequences for its Christmas programming. For instance, the usual thriller sequence features a bare light bulb that is shattered by a bullet, while the Christmas version features a glass bauble that showers glitter when smashed.

‘We are delighted with the rebranding work,’ says CineNova managing director Jan Zwerus. ‘It reinforces our position and makes an “appointment to view” with the viewer,’ he adds.

Kemistry won the job via a three way unpaid creative pitch in September.