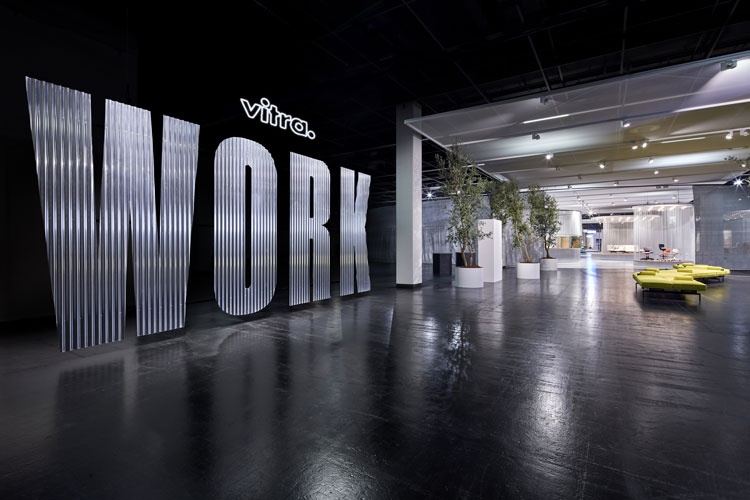 Workspace design for today and the future has been explored at the Vitra Work 2018 showcase at the Orgatec trade fair in Cologne, Germany.

Three concepts have been presented: a super-flexible space designed by Konstantin Grcic, a company home by Sevil Peach and a shared workspace by Barber & Osgerby.

The overall concept of Work 2018 has been designed by Pernilla Ohrstedt and Jonathan Olivares.

Ohrstedt says they asked themselves: “How do we nurture the discussion within the company, between designers and Vitra and partners to come up with new ideas about where the workspace is going? There isn’t one answer but to understand the challenges and possibilities we needed to come together.”

Keen to try create a place where “these conversations take centre ground” and “try out office concepts”, they created the Work “town”. This consisted of a central “street” with the three main concept designs on one side and smaller kiosks with partner products displayed on the other.

Exploring what workspaces of today had become, Ohrstedt says they have focused on “integrating public spaces” into the overall concept. 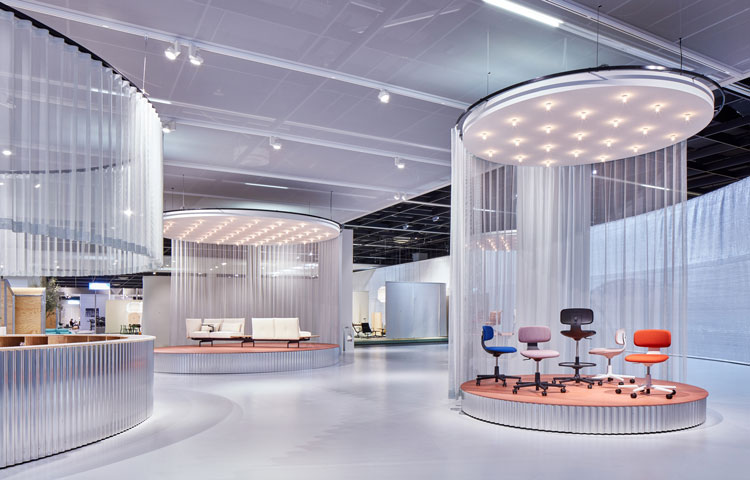 “People in the freelance economy typically move between spaces,” Ohrstedt says. “They will work in transit, in a café, in a park, at home and maybe in a shared office space.

“They will choose the spaces where they will be more productive in at that moment and that includes places for pleasure rest and breakout. Each of the office concepts have public space integrated within them.”

Enveloped in a reflective horizon made from a hanging fabric, the design of the overall space includes a lobby, a café, and a variety of different areas for people to work, recognising that the fair itself “was a workspace”.

“Everyone here has the same needs as someone working in the city all day. They need somewhere to rest, make a phone call, meet, go for a walk,” Ohrstedt says.

Considering the workspace of the future, she says: “My hope and where it seems to be heading is that everyone can have a more varied work day.

“Each person working can curate their working day in a series of spaces that work for them and their unique body clock and environmental clock.”

The shared space concept by Barber & Osgerby was inspired by “changing patterns in work” which they say was based on the idea of people increasingly working from public spaces rather than offices.

They feel this change is led by both technology and the flexibility that many workers now have, according to Edward Barber of Barber & Osgerby.

“No longer are you under the watch of your boss, you are now trusted to go work wherever which gives that flexibility,” he says.

“We realised there was very little on the market that helped accommodate that change,” Jay Osgerby says. “There is an opportunity to design a system that is the antidote to the old way of working and marks the end of the desk.”

Having created the lobby for the Ace Hotel in Shoreditch, London, they noted that people were working from all the sofas and soft chairs in the space.

Their workspace concept is centred around a new product, SoftWork, which they say responds to this perceived change and can be placed anywhere from airports to lobbies. 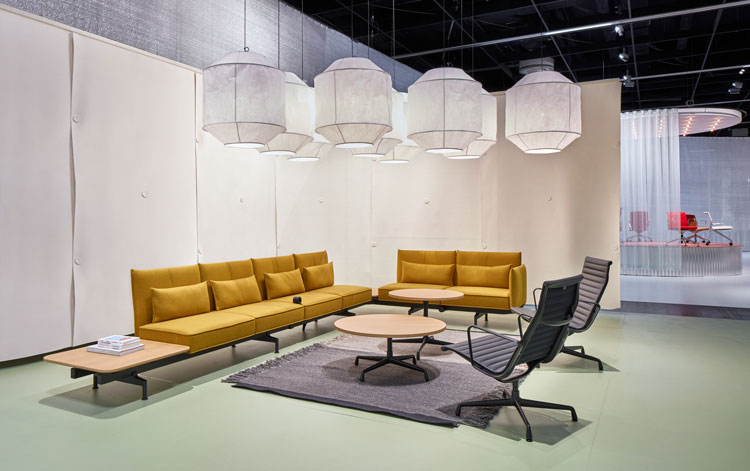 It is a modular sofa system, with aluminium legs and steel beams, that can be adapted to fit any shape and can include extra elements such as power sockets and tables for a laptop. It can also be adapted to create areas of privacy and co-working areas.

“The desk is dead”

“It is like Lego and can be anything you want it to be,” Osgerby says. “Especially as a freelancer, you miss the contact with colleagues and others. So the concept is about enabling you to work from a piece of upholstery and enables other people to join you.”

Osgerby claims “the desk is dead”.

“Everyone was trying to sell these over-complicated desks that cost a fortune and really there is no need as people aren’t working like that,” he says. 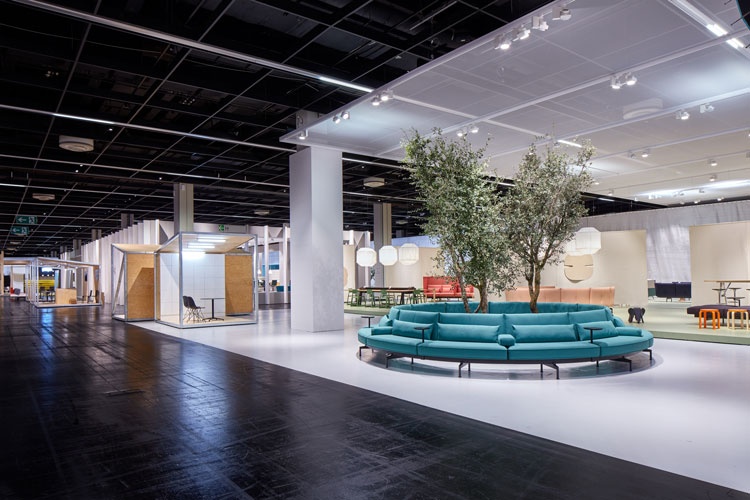 Considering the workspace of the future, he adds: “I don’t even know if the office building as we know it today will be in existence.”

Sevil Peach designed the concept of the company home, which she furnished with “a collage” of products.

“Because the general concept by Pernilla and Jon is about urban connections and how we work outside and inside, we basically wanted to do a proper building,” she says. “It is made of concrete which is crazy for a stand in an exhibition.”

Elements include desks, soft seating areas, an atrium, a café, a meeting room and a garden, providing a range of different spaces for people to work in, depending on their needs. Spaces suit collaboration, communication and other needs, she explained.

“It is quite serious, but still has flavours of different ways of working, where I hope people feel much freer,” Peach says. “If they chose to they have static desks, but what we tried to do is create a democratic space. For example, along the windows it is unterritorial, so everyone can share the view to the garden or street.”

“The office is here to stay”

Priorities for her, were to engage with the outside world.“Our office is on the ground floor in London and we really get to know the community because they look in through the window. It is nice to engage with the city rather than have offices that are like fortresses.” 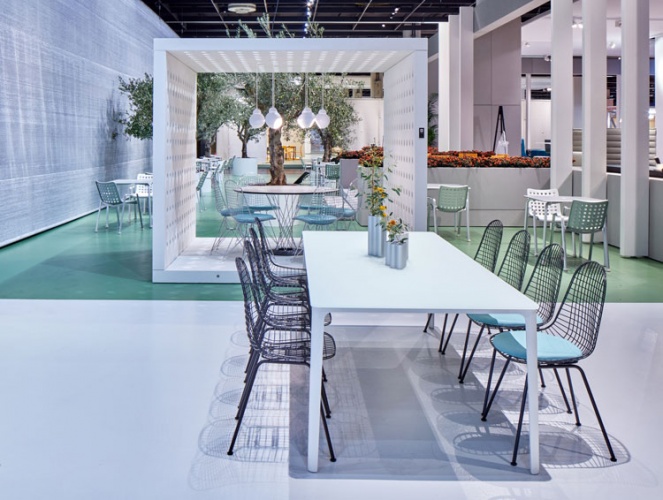 She envisioned her concept could be a company headquarters, designed to be as pleasant for workers as possible.

As for the future, Peach believes “the office is here to stay”.

“It is not ever going to go away in my concern. There is a social aspect to an office, it is how you meet your colleagues and share knowledge.”

But she thinks the focus should be on designing “supportive environments that are human centred in a better way.” 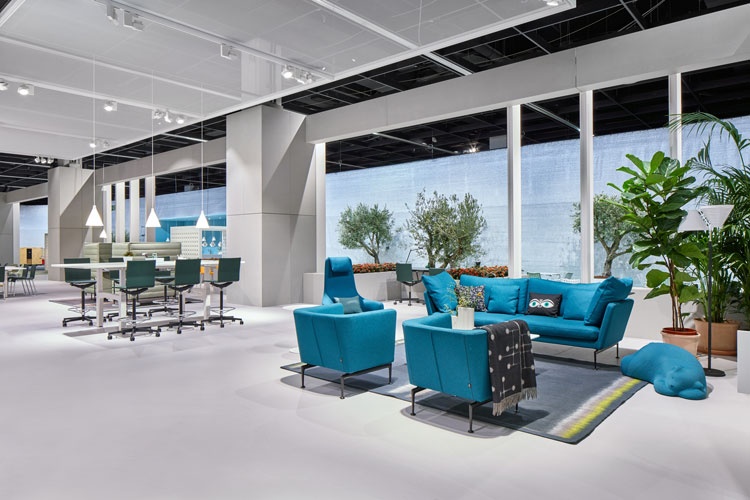 “I still don’t see that care that is taken for people and work environments, much of the world is still working as if it is a factory with rows of desks. I just want things to be improved,” she says.

Sustainability is also important for offices she says, and think there could be more of a focus on co-working.

“We can’t afford to build big buildings that are half empty,” she says.

Konstantin Grcic has designed the concept of the super-flexible workspace which is made to allow for constant change.

It is centred around an empty space with mobile furniture that can be set up and cleared away as needed. He compares it to a sports hall or gym which is reconfigured on a daily basis for various activities.

“It is a flexibility that can respond to changing the dynamics of an office,” Grcic says. “It is inventing those missing objects that you pull out to create a set scenario quickly. Say you need to gather 10 people to discuss something, everyone pulls out a chair and table and then stacks it back.”

Key products include the “simple” Rookie chair, which has less adjustments than traditional office chairs.

“It has the essential functions of an office chair and the essential comfort but no more than that,” Grcic says. “It fits a super flexible office as this chair is not yours, but it is yours for a certain amount of time.”

It also features the plastic stackable Stool Tool, a geometric seat which has two levels, allowing users to rest a laptop. He also created Scala, which is based on Spanish steps but made of soft materials, to create a public seating space. 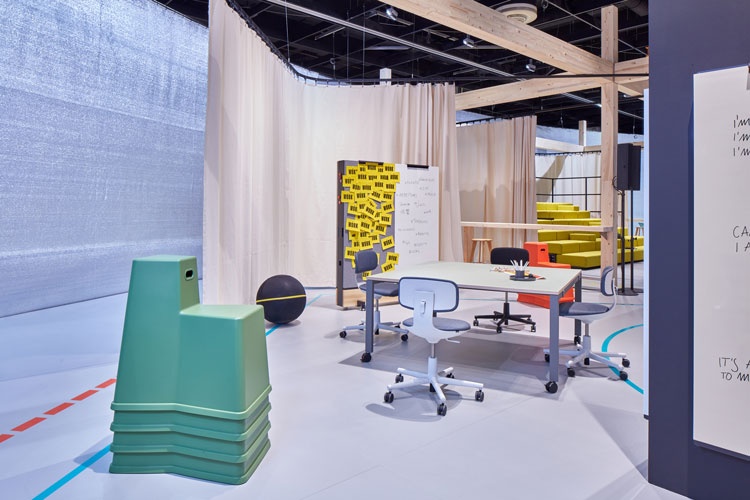 “Change means a lot of freedom in trying something out,” he says.

In the future, Grcic envisions more super-flexible workspaces, which allow for companies to constantly grow, shrink and change. He also thinks offices may “scale down” to create more “personal”, “smaller” units, to maintain “creative environments”.