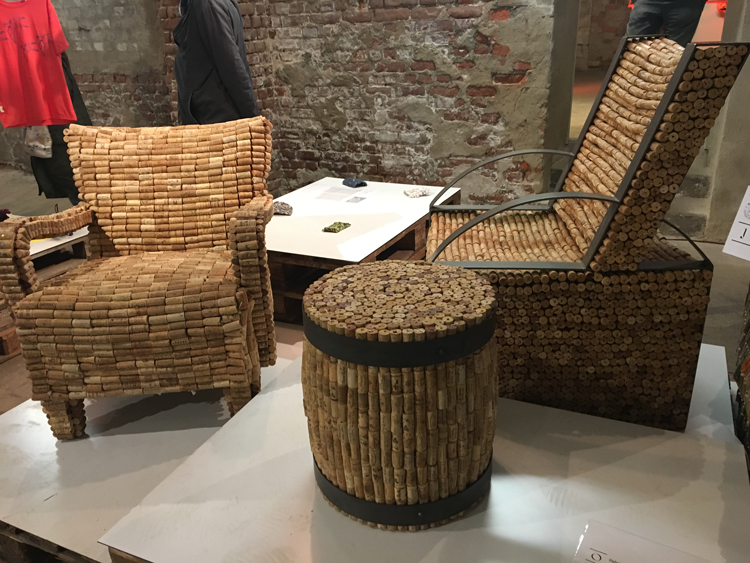 Fashion is one of the most polluting industries in the world – the constant production of clothing, and the need to destroy clothes that end up in landfill, are key contributors to greenhouse gases in our atmosphere, and therefore climate change.

With plenty of affordable, high-street fashion brands at our disposable, the UK is the biggest culprit in Europe for consuming “fast fashion” – that is, buying and throwing away clothes on a regular basis.

We have the highest consumption of new clothing on the continent, at 26.7kg per person, and it is estimated that 23 million items of clothing were sent to landfill in 2017. This is not just a UK issue, but a global problem – there was an estimated 1.2bn tonnes of carbon emissions produced by the fashion industry across the world in 2015.

Could upcycling be as beneficial as recycling?

An exhibition that took place this month as part of the Designers’ Open festival in German city Leipzig showcased the possibilities of upcycling, which is recycling’s even more sustainable little sister – the act of converting old clothing, materials and furniture into new things, without the need to destroy it and completely restructure it in the process, as recycling requires.

Common examples include turning old textile scraps, which would otherwise go in the bin, into bags and t-shirts and transforming corrugated cardboard used for packaging into quirky, sustainable armchairs and coffee tables.

The Echt Alt exhibition – translating to “really old”, and given the English alternative name Original Old – took place in the basement of the Kunstkraftwerk gallery, a fitting space for showing how the old can be repurposed into the new; the building used to be a power station in the previously heavily industrial West area of Leipzig.

Jewellery, furniture, clothes and more made from rubbish

Twenty-seven designers from Germany, Hungary, Spain, Italy, Colombia and South Korea contributed to the show, which saw everything from jewellery made from old circuit boards taken out of electronic devices, through to stuffed animals for children made from discarded cloth and textiles.

The show was curated by Lilly M. Bozzo-Costa, an architect originally from Milan, Italy, who now lives and works in Germany, and is currently working on designing for an ageing society.

Speaking to Design Week, she says that the core three principles of any good design are aesthetics, social purpose and a clear function – and that is what the pieces in Original Old aimed to embody.

“This show is trying to say: ‘stop with pollution, it’s enough’,” she says. “We want to make people realise that they don’t need so much and that they can use what they already have to make something beautiful that is also high quality.”

“Germany is a very industrial country”

Original Old is now in its fourth year, with Bozzo-Costa curating the original show in Florence in 2015. Every year, exhibitors for the show are sourced through an international upcycling competition. This year, the decision was also made to partner with designers from South Korea as special guests, given the country’s recent dedication to upcycling and sustainability.

In 2015, the Gwangmyeong Upcycle Art Center opened in South Korea, a huge space that has seen 800,000 visitors a year come to partake in workshops where they can learn to upcycle their own items. Expansion is on the horizon for the centre, which hopes to soon allow businesses and individuals to sell their upcycled goods, and is looking to build another space nearby which will function as a creative upcycling workspace for small businesses.

“South Korea and Germany are both very industrial countries,” says Bozzo-Costa. “They are both constantly producing new cars and electronics – it’s so deep in the culture. There is also a work-hard mentality, to be the best in production and show efficiency – this show is about looking for individuality and [asking people] to have a social responsibility.”

“A new way of looking at old things”

Zou Wei, an architect and exhibition designer for Original Old, helped to transform the basement space of the former factory into a showcase of different upcycled products.

“We want to start a new way of looking at old things,” she says. “As designers, we shouldn’t be designing something totally the same as before but creating something with a new story. The whole [Kunstkraftwerk] room, with its exposed brick walls, has been upcycled into an exhibition space itself, which is harmonic with the [products].” 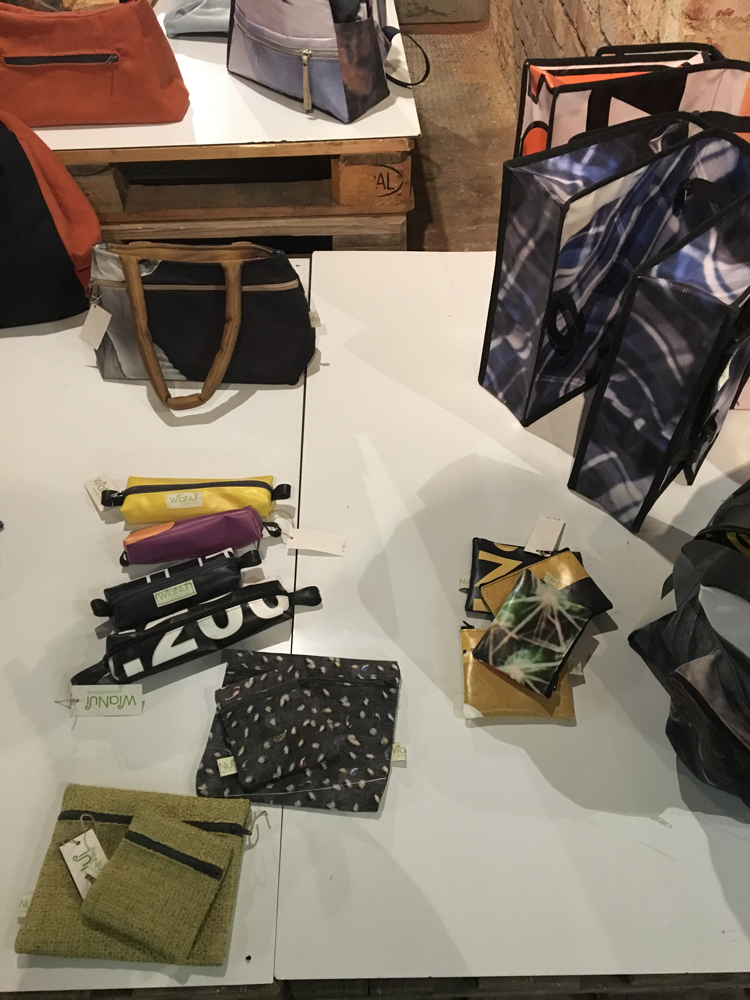 The exhibits range from jewellery and clothing to furniture, showing the full scope of upcycling. One exhibit, a bag company called Wia Nui originally based in South Tyrol, Italy, collaborates with an African tailor in Mali to create bags with patterns that have cultural connotations of Africa as well as Italy.

A variety of scrap materials has been used to make the bags, including the rubber taken from bicycle tyres, which forms a “soft and strong” handle, says Doris Raffeiner, co-founder of the company. She says that her and her partner Camila Hernandez de Alba are constantly “experimenting with different materials” to create “unique pieces” for consumers. 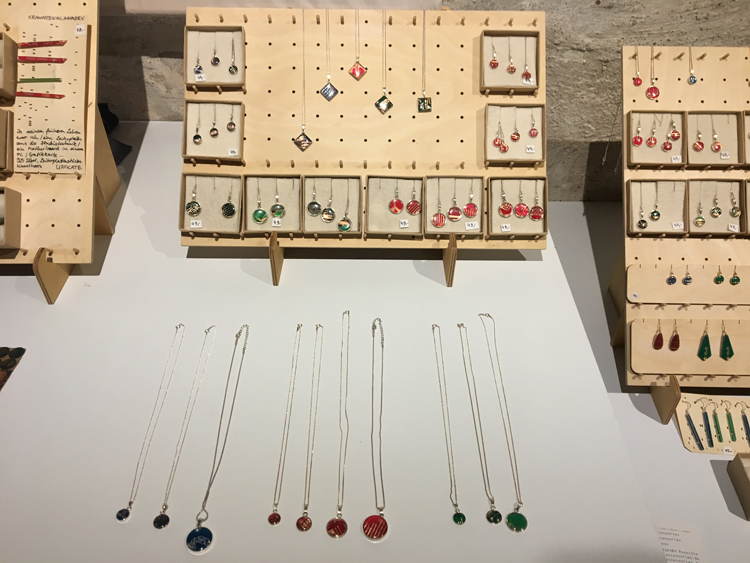 One of the more obscure exhibits is Circuit Accessories, a German company that recycles “e-waste” such as circuit boards taken from laptops and smartphones, and turns them into necklaces, earrings and other pieces of jewellery.

Roswitha Petersen, founder and designer at Circuit Accessories, undertakes an intricate process of cutting out pieces from circuit boards, sanding them down, coating them in resin to protect them from oxidation, then setting them against sterling silver and coloured metals. The process results in completely unique pieces and aims to show the hidden “treasures” within waste, she says, which is normally disregarded.

“It started with a fascination for the material,” she says. “I was cleaning up my apartment and realised that I didn’t want to throw all the electronics away, so I decided to make jewellery out of it instead. Nobody saw the beauty on the inside of an iPhone before, and now they do.” 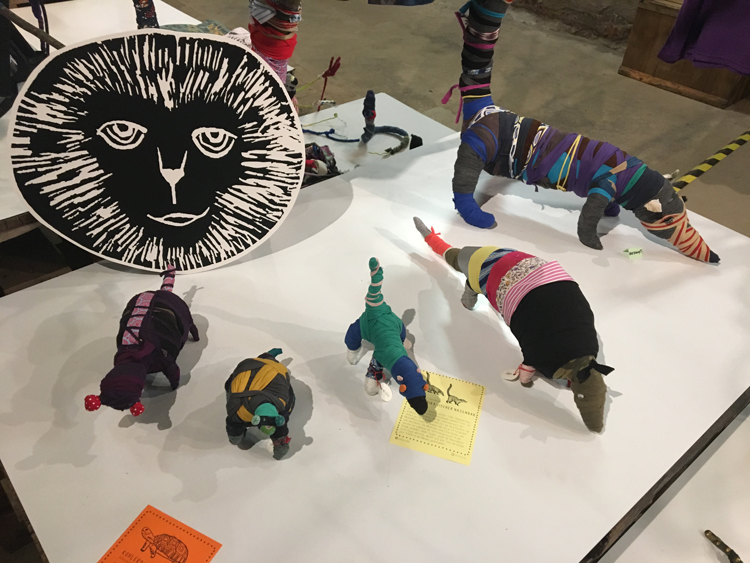 One of the most heart-felt projects in the show is Colombian clothing brand Selvita, founded in 2014. The initiative, started by two artists and a designer, has two main aims – to encourage upcycling and reduce clothes waste, while also teaching children about different species of animals and biodiversity.

The team offers workshops to adults and children, where they can bring in their old t-shirts, then hand-print them with images of lesser-known animals, many of which are native to Colombia. Other workshops see leftover textiles used to make stuffed toy animals, ranging from monkeys to sloths and birds. Alongside the craft element, the workshops teach the children about creatures, their habitats and their traits – for example, which snakes are poisonous and which are harmless.

“Colombia has a big textile industry, so it’s very easy to source leftovers,” says Marcela Ceballos, an industrial designer at Selvita. “There are so many animals in Colombia which kids don’t recognise, or they just see on the road when they’ve been hit by a car. We want to foster biodiversity and get the kids more emotionally involved with these animals. At the same time, they are learning to do silk-screen stamping, making their own product and having a meaningful experience.” 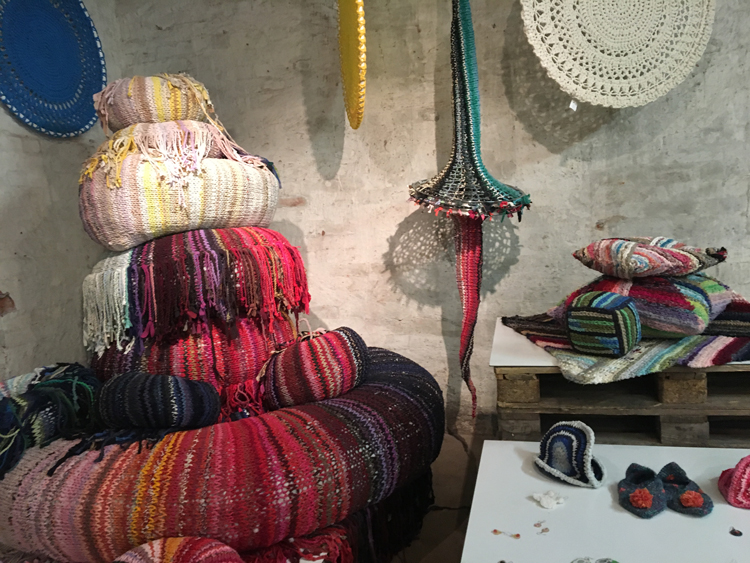 Another project which has two holistic purposes is Hungarian initiative Retextil. The team of volunteers work with roughly 40 people with physical and mental disabilities, turning used clothes and textiles into thread that can then be weaved into furniture, clothing and more.

The initiative aims to teach people new skills, such as looping, weaving, knitting and stitching, while also acting as a form of holistic, art therapy, promoting upcycling as well as the benefits of hand-craft, says artistic director Angéla Thiesz. The end result is material-based furniture and chairs, tapestries, carpets, bags, jewellery, clothing, and sometimes even huge, outdoor installations. 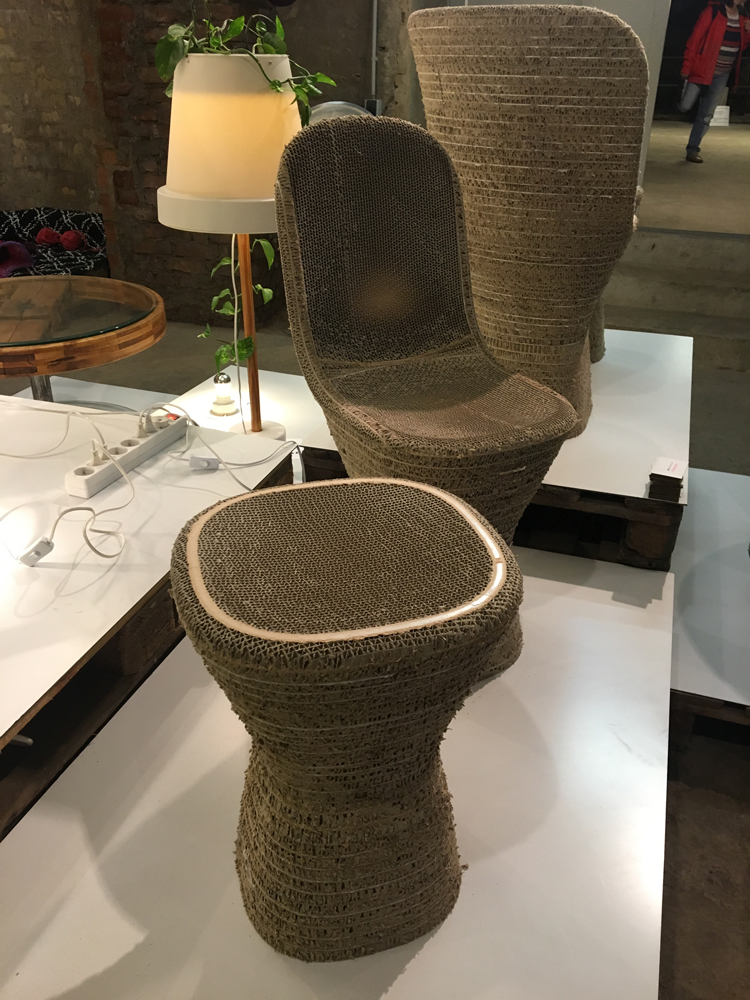 German craftsperson and artist Gabriel Wiese has also found an inventive and sustainable way to make furniture through her series of chairs and stools made of cork. Wiese has also experimented by creating carpets, tables, chessboards and even clothes from the material. Similarly, German designer Björn Bernt creates furniture using honeycomb cardboard, the type of cardboard often used for packaging, or for model-making by designers and artists.

Bernt, who works at an art college, collects this leftover cardboard and turns it into chairs, stools and tables by cutting it up, gluing pieces together to make blocks, then turning these on a lathe or processing them in a CNC-milling machine – two machines used by product and furniture makers, which file down wood and metal into desired shapes. “I just use leftovers of material I find at work, and it makes sufficient, indoor furniture, which I think will last for a couple of years at least,” he says. 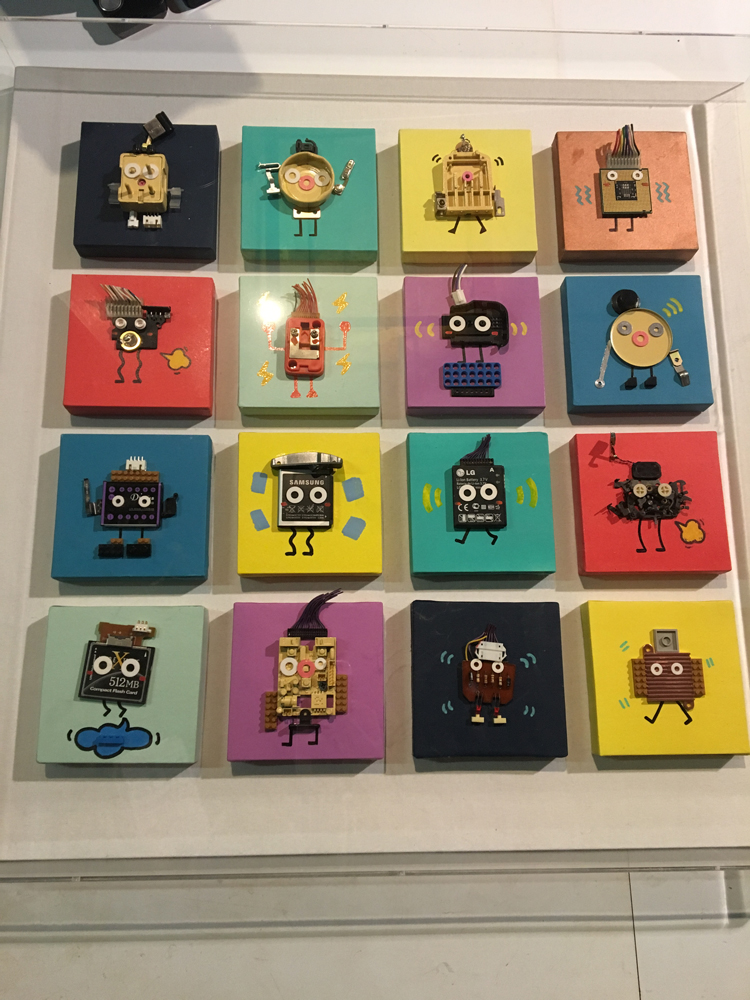 Many of the South Korean designers in show interpreted the theme of upcycling in an artistic way. One particularly charming example is Fori Sim’s transformation of e-waste, which involved collecting parts of phones, laptops and other electronics, and using them as a collage to create cute, three-dimensional portraits of robots.

Another is Yong Chul Kim, who looks at the abundance of plastic toys for kids, turning disused toys into a giant 3D star, which functions as a colourful work of art. A more practical use is Young Wan Yang’s Shovel Tray, which sees a food tray made simpler to carry by attaching a handle from a gardener’s shovel. 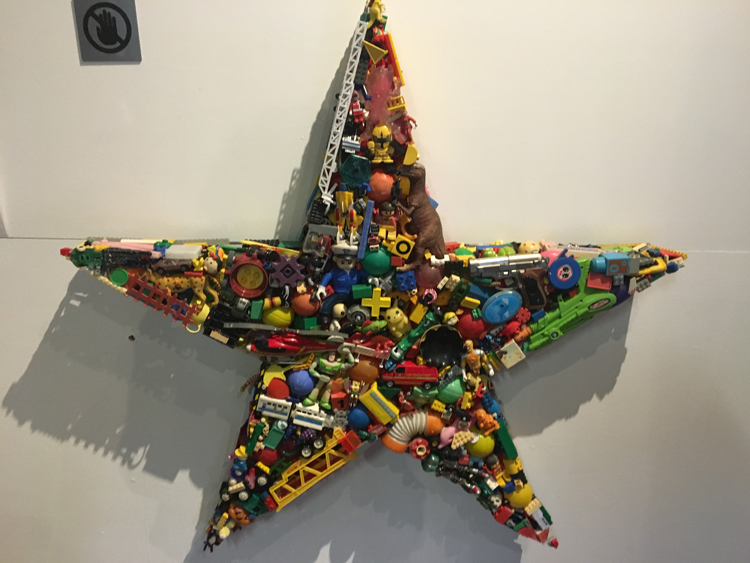 The Original Old exhibition showcased unique designs by 27 creatives across the world – but they all had the same message that attractive and practical day-to-day items can be created out of old materials, rather than new ones.

Interestingly, its focus on upcycling also turns the world’s recent focus on ditching and banning all non-compostable plastics on its head, a notion which is being pushed by governments globally. Instead of pushing the need to consume only recyclable materials, the show is suggesting that things that do not decompose can be reworked for another purpose into something new and more long-term, rather than being banned altogether.

While there is no doubt our consumption of non-biodegradable plastics across the world must be reduced, designers like those showcased in Original Old suggest that there may be another life for materials that already exist, without them needing to fill up oceans and landfills.

Echt Alt/ Original Old took place 26-28 October 2018 at Kunstkraftwerk Leipzig, Saalfelder StraBe 8b, 04179, Leipzig, Germany, as part of the city’s festival, the Designers’ Open. For more information on the exhibition, head here, and for more on the festival, head here.

What does the Budget 2018 mean for designers? Analysis and reaction