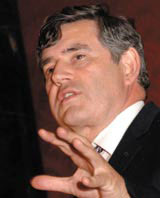 Perhaps it was inadvertent, but in his address to the great and the good last week, Chancellor Gordon Brown threw down the gauntlet to the design industry.

The presence of arguably the most powerful person in British enterprise at the launch of the London Design Festival is a testament to the seriousness with which Government views this sector right now. This is crunch time, as all those design industry figures on the fringes of Whitehall well know.

‘Design is not incidental to modern economies, but integral; not a part of success, but the heart of success; and not a sideshow, but the centrepiece,’ said Brown last week. Many who heard him seemed convinced that this sentiment was not merely hot air. Brown, after all, could have got anyone else from the Department of Culture, Media and Sport to produce that for him. So if he really means it, what does that mean for the industry? And if he means it enough to think about investing taxpayers’ money on design, where and how should it be spent? That is something Sir George Cox is likely to take up with the Chancellor when he delivers the Cox Review towards the end of the year.

‘There will certainly be the question of cost,’ says Kesslers International managing director George Kessler, who sits on the London Development Agency board. ‘If the Cox Review recommendations were to run into billions, there might be a problem, but that is not likely to happen. Remember, Cox is there at the personal request of the Chancellor – this review was not set up as a result of external pressures.’

What appeals to the Chancellor about the design world, of course, is not its glossy image, but its ‘double digit’ rates of super-normal growth: ‘I don’t need to tell you, that our creative and design industries, from digital electronics and communications, to film, design and fashion – employing two million people – already account for more of our economy than anyone else’s,’ Brown told the assembled glitterati of the London Design Festival.

‘The reason why [creativity] is so important now in this century, is that in today’s global economy – where capital and labour are so mobile, where goods, and often services too, can be produced anywhere – it is the power of a country’s creativity, the power of ideas and innovation, of creativity and design, adding value, that will make the difference between economic success and economic failure, between prosperity and falling behind,’ he continued.

So it appears that all the hard campaigning by the industry’s executive bodies is being well received, as Brown awaits Cox’s recommendations for sustaining the bleeding edge of British enterprise. Come the time Brown fanfares his intentions, though – probably in the Pre-Budget Report – the key decisions about ‘what to support’ and ‘how’ will have already been made. Perhaps all most of us can do now is sit tight and wait. But there is still concern that if the case is not well-made, a golden opportunity for the future of designers, design consultancies and their consumer and business markets, could pass us by.

‘Let’s be clear’, says Kessler, ‘this is a one-shot opportunity for the Cox Review. If Cox fails to convince the Chancellor, or if his recommendations are not to the Chancellor’s taste, we are not likely to see another opportunity like this in our lifetimes.’

Privately, industry pundits still do not know if all the rhetoric about the business case for design will fit properly into the Chancellor’s economic toolbox. The question is, will the arguments stack up in a usable, tangible way that can not only become a template for setting up businesses in the future, but also be used by the rest of British industry to boost its sluggish top-line growth? The Design Business Association says so, and so does the Design Council, but can they convince HM Treasury?

Clearly, a lot rests upon the next few weeks, and it will depend not just on how well we understand our own business models, but on how well we can persuade the Government that our nous can be applied to the rejuvenation of British industry.

The design organisations have now all delivered their recommendations for Cox’s perusal – we can only hope they have risen to the challenge. Part of the answer is about simple, effective communication to the outside world, not about ‘what we do’ in design, but about what it can achieve in non-design terms. If we can’t move the Chancellor’s own speech writers beyond ‘success does not happen by accident, it happens by design’ – their current favourite soundbite – we will surely have failed.

Never before has it been so urgent to prove, not just one business case for design, but the potential of design’s diversity as a global economic force. Now is the time for this to happen if we are ever to catch this tide in our affairs.

Questions for the Chancellor

• Will we see the creation of an R&D tax credit, which industry lobbyists want to see extended to the design sector?

• Who will implement the Cox Review recommendations? The Regional Development Agencies, the Design Council, or someone else?

• Does design in Britain need a national centre to champion its work? If so, where should it be based?

• How can we extend best practice to industry? Should there be a network of creative non-executives, as proposed by the DBA?

Only large groups have time to fill in PQQ forms