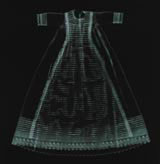 The dark, ghostly imagery of Adam Fuss is imbued with layers of meaning which takes time to understand and absorb. Ed Barber examines his unique approach to art and the photographic processes involved

Walking from the sunshine of crowded Oxford Street into the cool, barely-lit interior of the Timothy Taylor Gallery, you are met with an austere space – all polished concrete and understatement. To your right is a bare wall and on your left is a row of black framed rectangles, which turn out to be photograms of children – further back in the gallery are two larger pieces. In a chamber-like room, off to one side, there is a series of metal plates, each one slightly different, but reminiscent of the famous Harold Edgerton image of splashing milk. So what exactly is this work and who is their creator?

All the images here are based on photographic processes. Their author, Adam Fuss, has built a reputation for producing highly deliberate, often camera-less images. Each one is a unique work of art, which, according to his gallery, ‘uses light and chemistry to explore the outer reaches of vision. Fuss’ work does not reproduce the seen, but discovers the unseen’.

Originally from London, Fuss has been in New York since 1982 and has been making images for some 20 years. Having started with 35mm images, Fuss later got involved with pinhole cameras and then realised he wanted to make – rather than take – pictures. His work has been shown internationally, but this is his first solo show in the UK. Galleries, dealers, curators and viewers in this country have taken a long time to take this kind of photographic art seriously.

And this is art with a capital ‘A’ – these photographs are not documentary, illustrative, pictorial or even decorative. They are Fuss’ own vision of the world – manifestations of his inspiration. At once both banal and provocative, you may start off feeling vaguely bored and wind up mesmerised. Fuss himself says he wants to make ‘compelling images’ and he will use whatever photographic means he can to pursue this objective.

But to get the most out of this work, you have to invest some time in it. Spend ten minutes staring into the deep black of the children’s torsos series and eventually your eyes adjust to the darkness, allowing you to make out ghostly traces gazing out from the depths of the luscious silver gelatin prints. Fuss believes that ‘you have to earn your reward’, by looking hard at these images. For him you put in the work and ‘truth is your profit’.

Those metal plates in the chamber are in fact daguerreotypes – a little used image-making process that dates back to the very beginning of photography. It’s a potentially lethal method of producing an image, combining mercury and chemical vapours to make pictures on polished silver plates. It’s not for the fainthearted, which is why Fuss is among only a tiny handful of people still using the process.

As for the larger images, they are different again. One is a ‘view into another universe’ – a massive photogram using powder, through which live snakes have slithered and left unpredictable trails. The animal as performance artist! Fuss is no stranger to using animals to make his art. Previous pieces have involved rabbit’s entrails and bird flights.

Fuss flies in the face of the 21st century digital revolution, where everything is instantly capturable as an image, downloadable, and printable. He prefers the unique, the one-off. For him, the images are merely ‘signposts – not the final destination’.

If you put the art pretension and portentous claims to one side, and consider the work itself, it reveals a singularity of purpose. But there is no light touch at work – everything seems to be fully loaded with meaning. It could even be described as deep and oppressive. To appreciate it fully, you must invest time, energy and perhaps money – oh yes, it is highly saleable.

The other large piece on show is a pigment print of a butterfly chrysalis scaled to human size. Based on a scan, this is a very striking and other-worldly image which, according to the gallery, ‘reveals a being about to emerge into the light of day’. After an hour or so of viewing Fuss’ work, you might feel like making a dash for freedom and doing the same.

Gordon Brown throws down the gauntlet