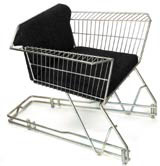 The latest trend, to take used furniture and other discarded items, and turn them into objects of beauty, is not just about Green issues, as Trish Lorenz found out – there are more sophisticated aesthetics at play

From used bottles cast in ceramic, to lamps made from ducting and plastic bag vases, the most precious objects may soon be those that once had no perceived value.

It’s part of a subtle shift in perspective at this autumn’s furniture fairs and exhibitions – young product and furniture designers across Europe are responding to a global trend of reclamation, recycling and reduction. They’re taking a second look at existing objects and redefining the language of value and waste.

The result is that surplus items are being re-used in innovative ways – objects once perceived as purely functional are reinvented with a new aesthetic, and things too precious to discard are revitalised for a second use.

Re-use is a mixed field. There are those that re-use actual waste, like British group WEmake, whose projects include Street Sofa, a seat made from an old commercial dustbin, and the self-explanatory Computer Fan Fan. The origins of the objects it works with are not disguised – they’re embraced and celebrated.

WEmake director Jason Allcorn highlights this when he outlines the thinking behind Computer Fan Fan. ‘So many computers are dumped and the fans are designed to have a longer life than they’re used for,’ he explains. ‘We give them a second lease of life. They’re quite raw looking and have a modern aesthetic. Previously, they were hidden, purely functional, but now they are beautiful.’

German designer Killian Schindler’s series of vases are another example of this approach. Stopfervase is simply the head of a suction plunger and a glass tube. When filled with water and stems, the vase inclines and sways – amass a group of them and they resemble a modern-day wild meadow.

Another of Schindler’s products, Vasenring, is a cylinder of glass designed to encase a plastic shopping bag that then acts as the vase, holding both flowers and water. With a plethora of plastic bags to choose from Vasenring is both contemporary and ever-changing.

‘I want people to think about the possibilities inherent in daily waste and get them to give greater value and importance to common objects,’ explains Schindler. 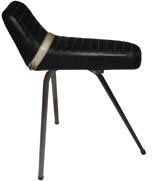 British furniture designer Marcus Sharp echoes these sentiments. ‘Re-using objects is definitely a statement on our throwaway society – it asks people to reconsider what everyday objects are,’ he says.

But environmental considerations aren’t his primary motivation, he adds. Sharp sees re-use as a way to ‘connect with people’s memories and feelings’. His Re Cycle chair, for example, employs the seat of a chopper bicycle to make it ‘comforting rather than comfortable’. He explains, ‘It takes the user back to a time or place – the feeling of sitting on a chopper links back to childhood memories.’

Allcorn agrees and says re-use can also inspire creativity in others and make design more accessible. ‘It’s about demystifying design – an ‘everyman’ way of looking at designing products. People recognise where things come from,’ he says.

It’s easy to dismiss these objects as experimental, and the movement is certainly a long way from mainstream. But the designers are aware that many of these products don’t yet have mass market allure, and there are moves being made towards finding a more commercial form of re-use.

Product and furniture designer Osian Batyka-Williams has designed his own pieces – such as the Cutlery Chair, which puts discarded restaurant cutlery to good use. He now plans to begin work with a company that makes objects from reclaimed office furniture, from the end of September.

‘Its products don’t have that obvious re-used aesthetic to them,’ he explains. ‘It’s important to re-use materials in a more modern way, for people who don’t find the ready-made aesthetic appealing.’

Batyka-Williams will be working on a children’s range which aims to encourage a ‘whole new generation of people to see furniture in a different way’. He says, ‘I want people to recognise that reclaimed products don’t have to look ready-made, they can be as aesthetically pleasing as Ikea.’

Unconsciously, he echoes one of the pioneers of the concept, Dutch designer Piet Hein Eek, whose fascination with reclaiming and recycling started over a decade ago, as ‘a reaction to the craving for perfection that exists today’.

Eek works with materials that have no real monetary value, such as scrap lumber discarded by industry, but his meticulous handling translates rejected materials into pieces of sensitive beauty. ‘I aim to show that products that are not highly polished can still appeal to our sense of aesthetics and functionality,’ he says.

The motivations, methods and outputs of designers vary widely but one thing is clear. Although all this work has, at its core, an environmentally friendly ethos – re-use is simply recycling by another name – that’s rarely the only consideration.

What is in evidence, across the board, is a rejection of disposable, mass-produced design in favour of a more individual and crafted approach, and a drive to encourage all of us to question the meaning of value and the value of perfection.

More designers who have worked with reclaimed objects:

Tommy Allen – rescued an abandoned bath and sliced it vertically to convert it into a seat.

Silvia and Britta Knüppel – these German sisters designed Faraday’s Best Friends-Torches – torches that become a wall or ceiling light with the addition of a fine glass shade.

Ray Koh – the American designer’s VaseMaker turns any container into a delicate vase.

Lost and Found – revitalises vintage bus destination rolls by converting them to blinds.

Reestore – updates the humble shopping trolley and converts it to Annie, an armchair with a difference.

BBC1 ident update on the cards as it considers new look