The operating profits of the top 30 design consultancies fell by 50 per cent through 2009, according to a report from accountant Kingston Smith W1.

The Financial Performance of Marketing Services Companies Annual Survey is based on the most recently filed accounts of companies, most of which relate to 2009.

The report also shows that gross income generated by the top 30 consultancies was down by £20m – 7.2 per cent down on the previous year – while operating profit margins fell from 12.5 per cent to 6.7 per cent, their lowest level since 2004.

Future Brand suffered the largest decline in gross income – falling by 42 per cent, from £8.8m to £5.1m. Fitch saw a drop of 26 per cent, Design Bridge 25 per cent and Corporate Edge 24 per cent.

The Team saw a 36 per cent increase in gross income, while its Loewy Group stablemate Seymour Powell reported a 31 per cent rise.

Lloyd Northover and Photosound Communications have both dropped out of the top 30, due to declines in gross income. They have been replaced by Venture Three and The Partners.

Amanda Merron, partner at Kingston Smith W1, says, ’A well run consultancy should be able to generate operating profits of at least 15 per cent of gross income and, ideally, 20 per cent. This year only nine of the top 30 achieved greater than 15 per cent and just six achieved greater than 20 per cent, down from ten in the previous year. Given the prevailing economic climate, some designers have done well to continue to generate reasonable levels of profit in the face of such difficult economic times.’

Merron says, ’This is the first year that the full effect of the economic downturn has been reflected within the design sector results. The top 30 as a whole have suffered both a fall in productivity and profitability.’

She adds, ’Worryingly, the employment costs to gross-income percentage [ratio] has now reached a four-year high and implies that consultancies are not keeping tight controls on employment expenses. Group-owned consultancies have shown that with group encouragement they have managed costs more tightly than independent consultancies.

’Results for next year’s survey will be interesting, as 2010 is still slow, but nevertheless an improvement from the bottom of the recession in 2009.’ 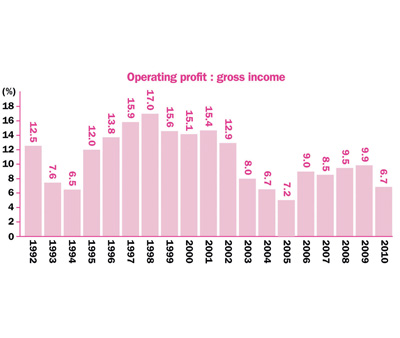