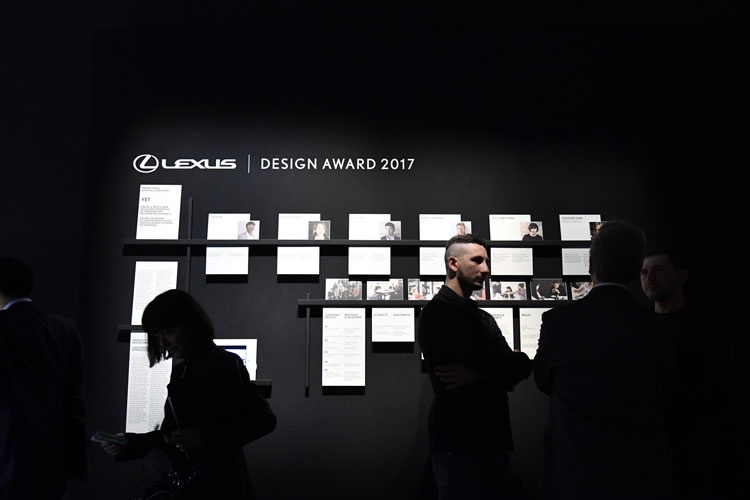 Now in its fifth year, the Lexus Design Awards sees up-and-coming designers from all over the world submit design proposals which look to tackle different social issues.

This year’s award drew more than 1,100 entries from 63 countries under the theme of “Yet”. These were then whittled down to 12 finalists whose concepts are on display in a special exhibition at Milan’s Triennale design museum throughout the course of design week.

The designs on display range from a modular temporary shelter for displaced populations created in response to the ongoing refugee crisis to an upcycled, strengthened version of paper which looks to extend the material’s short lifecycle and reduce waste.

It was Japanese spatial designer Hiroto Yoshizoe’s Pixel concept, however, which most impressed the judges. Yoshizoe was awarded the overall winning prize for his experiential design, which plays with the idea of “light yet shadow” and comprises a series of framed building blocks.

The building blocks act as a grid-like filter screen to create a range of light and shadow effects depending on what is projected behind it, and could be used for visual and art-based installations in the future.

Yoshizoe’s Pixel prototype was developed over the course of four months in partnership with the designer’s assigned mentor – New York-based studio Snarkitecture – along with three other prototype finalists, which are also on display at the exhibition.

United by the common idea of sustainability and multi-usability, the other prototypes include Korean designer Ahran Won’s “having nothing yet everything” minimalist capsule, which contains only the bare essentials needed for mobile living, and UK and China-based Jia Wu’s vegetable-cum-musical instrument modular toy system, designed to encourage and develop children’s music skills through play.

Royal College of Art graduate Jess Fügler also addressed the idea of longevity with her 3D-printed floor covering made from different coloured and textured rectangular beads, which can be adapted to reflect how personal tastes and interiors naturally change over time.

To mark its tenth year showing at Milan Design Week, Lexus has also commissioned architect, designer and professor Neri Oxman of the Massachusetts Institute of Technology’s (MIT) Media Lab to create an installation for the opening space of the exhibition.

In similar fashion to Yoshizoe’s winning Pixel concept, Oxman and her design team has played with the idea of “light yet shadow”, combining the “ancient” material of glass with the “modern” technology of glass 3D printing developed by MIT to create a light-based installation comprising a series of 3-metre high pillars.

Lexus Yet will runs until 9 April at the La Triennale di Milano, the Design and Art Museum in Parco Sempione, Milan.

From lying to nudity: interviews designers will never forget