Liverpool-based design studio Uniform has created the look of the official match football that will be used during the next season of the English Football League (EFL).

The ball has been developed on behalf of sports equipment brand Mitre and has been inspired by the associations playing football has with “positive mental health”, according to Uniform. It will feature in all EFL games, and the Carabao Cup and Scottish Premier League will also adopt it in their own colourways.

Uniform has worked with Mitre previously on several projects, including the Scriball toy for children (which encourages you to draw on your own ball), the 2018-19 FA Cup ball and the “return” of the Mitre Delta ball from a decades-long hiatus in 2017. The studio was approached for this project around 18 months ago, with a “simple, if not a little ambitious” brief, according to Uniform creative lead Richard Pay: “Create an iconic football”. 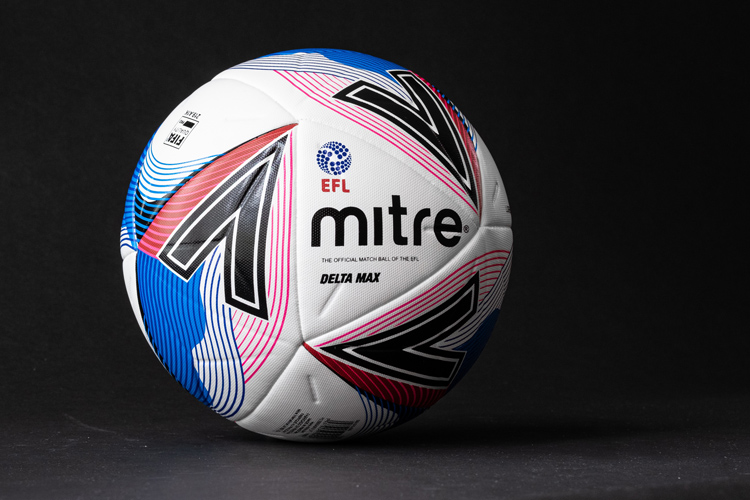 “Football is time for yourself”

The overarching theme for the ball is mental health, and the positive impact that playing football at any level can have on our minds.

“Football is time for yourself, to get your head in the zone and escape the pressures of modern life,” Pay tells Design Week.

Getting “in the zone” is referred to in psychology as entering a “flow state”, wherein people are fully immersed in a feeling of energised focus. This idea influenced the graphic design of the ball – the surface is adorned with “fluid, organic graphics” which Pay explains represents this flow.

“A story that would bring a fresh perspective to the game”

Rather than focusing on constantly pushing for better, he says the team sought to bring a different narrative to football with this design.

“We know that young players drop off during their teens due to the pressures they face,” Pay says. “And while many football brands focus on constant progress and pushing yourself harder – we needed a story that would bring a fresh perspective to the game.”

The concept to centre the ball around positive mental health was first set out when Uniform took on the project a year and a half ago. But with the UK being placed under lockdown to prevent the spread of the coronavirus pandemic, Pay says the idea has been given an even deeper meaning.

“With all the shit that’s going down now – we need to take time to escape the madness,” he says.

“The design needs to transition from one panel to the next”

There are several challenges to overcome in the process of designing a football, Pay explains – the first being, and perhaps biggest, being the shape of the canvas.

“Imagine designing a poster that has no start point, no end point, no top, or bottom, no edge,” he says. “The design needs to transition from one panel to the next, all the way around and back to itself.”

Pay adds that the Uniform team “didn’t make it easy for themselves” by developing a ball that features fluid graphics, since these are notoriously difficult to map around a spherical design. But having based the design on the concept of the “flow state”, these graphics were necessary.

Additionally, the graphics needed to be distinctive enough to see from afar. Given that usually footballs are only seen “at the size of a pea on screen in motion”, this was “no small feat,” Pay says.

“Designing a new experience around the enjoyment of football”

The design was delivered just before the pandemic emerged in the UK earlier this year, so while the coronavirus crisis did not affect Uniform’s development process, it did push back the launch of ball.

Professional football has since returned, but behind closed doors. Back in June, Design Week covered the quest to find design solutions for a lack of crowds, with some suggesting innovative sound design was the key.

Pay, who says there is a necessity for “designing a new experience around the enjoyment of football”, suggests that having a focus on the mental health benefits of playing the game is one way of doing this.