Royal Mail has unveiled its latest special edition stamp collection, celebrating the 200th anniversary of the Royal Astronomical Society (RAS) and the UK’s contribution to the field.

The set of eight stamps have been designed by True North, the Manchester-based design studio that has previously worked with Royal Mail on several special stamp issues, including the Football Heroes, Ladybird Books and London 2012 collections, as well as last year’s yearbook. 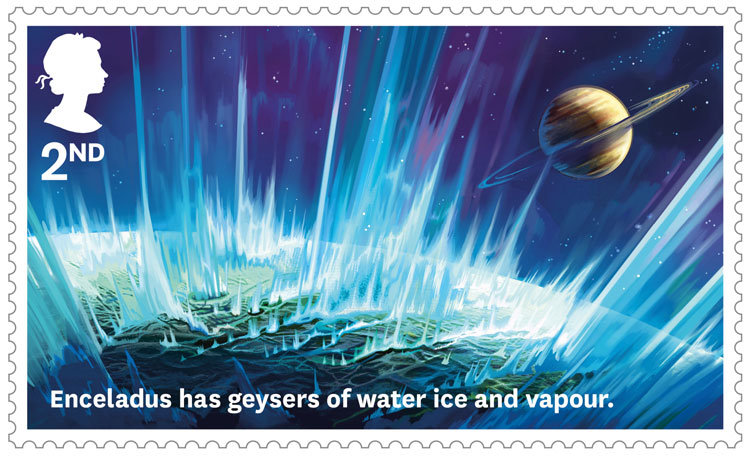 “Visuals that photography couldn’t give”

The collection, titled Visions of the Universe, features phenomena discovered and investigated by UK astronomers and astrophysicists. It includes depictions of a black hole, a pulsar and a comet, as well as Jupiter’s auroras and the Cygnus A galaxy. Each of the eight astronomical events and objects have been illustrated by Robert Ball.

“There are so many scientific photographs of these events and objects, and they’re really lovely,” says Royal Mail design manager Dean Price. “But at the same time, we wanted to explore visuals that photography couldn’t give.”

Opting for an illustrative style allowed the team to “put viewers into the events”, according to Price.

“The geysers on the 2nd Class Enceladus stamp, for example, usually show up in photography as a white spray on a white circle,” he says. “Whereas using Robert’s illustration we have been able to put viewers on the moon, to show what it would really be like to be standing among these exploding geysers of water.” 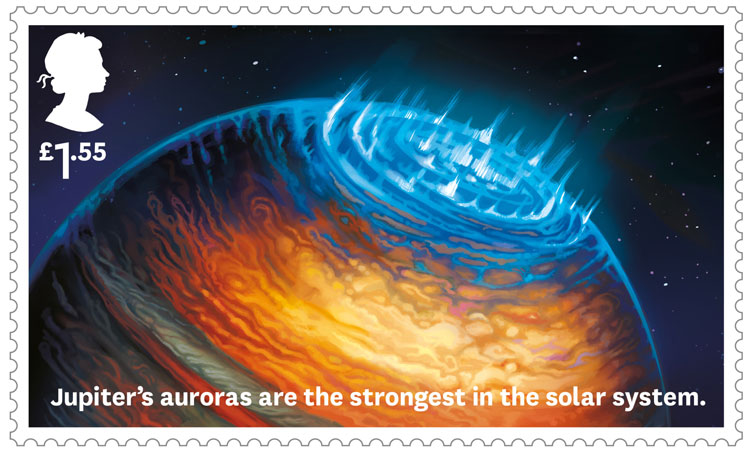 The use of illustration also allowed the True North team to unify the stamps as a whole set, in terms of both colour and composition.

“We wanted to bring together these incredibly diverse astronomical events and objects as a collection with real visual impact,” says Steve Royle, creative director of True North. “In reality, a lot of these phenomena can appear quite dark or monochromatic, but we used colour to convey the right sense of drama.”

According to Royle, each stamp has been “carefully curated” so the team “could get the most” out of the phenomena depicted. Rather than portraying still images, he says True North has tried to capture moments.

Senior designer at True North Victoria Pinnington echoes this: “Because so many of these discoveries were such active things, it was crucial the stamps did’t feel like they were standing still.” 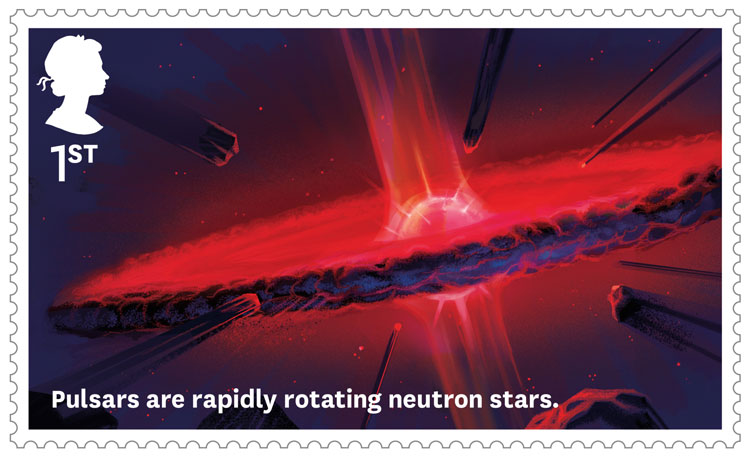 Fitting a black hole onto a stamp

The task of choosing which events made it to the set was a collective undertaking between True North, Royal Mail and the RAS.

According to Royle and Pinnington, the team worked from the visuals that the RAS had in its extensive image collection and from there, it was “clear which events needed to be captured”.

“It was important for us to reflect 200 years of the Royal Astronomical Society’s history,” says Pinnington, adding the RAS was keen to highlight certain discoveries. As such, the phenomena depicted ranges from the Cat’s Eye Nebula studied by William Huggins in 1864, to the discovery of pulsars by Jocelyn Bell Burnell and Antony Hewish in 1967, to present day.

The final result has an irony that is not lost on the team. “How do you explain the size of a black hole on the canvas of a stamp?” says Price. He ends: “We knew that to achieve what we needed, we had to keep things as simple as we were able to and really just let the illustrations speak for themselves.”

The Visions of the Universe stamp collection will be available for purchase from 11 February 2020. Products available will include a First Day Cover, postcards, presentation pack and limited edition Stephen Hawking coin cover. Prices start from £3.60 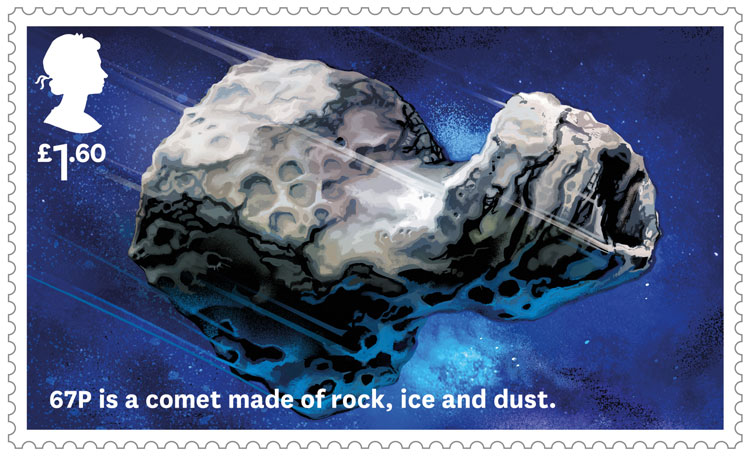 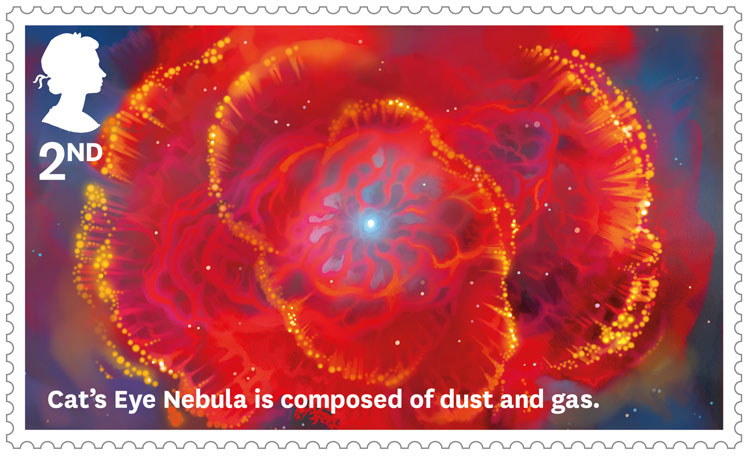 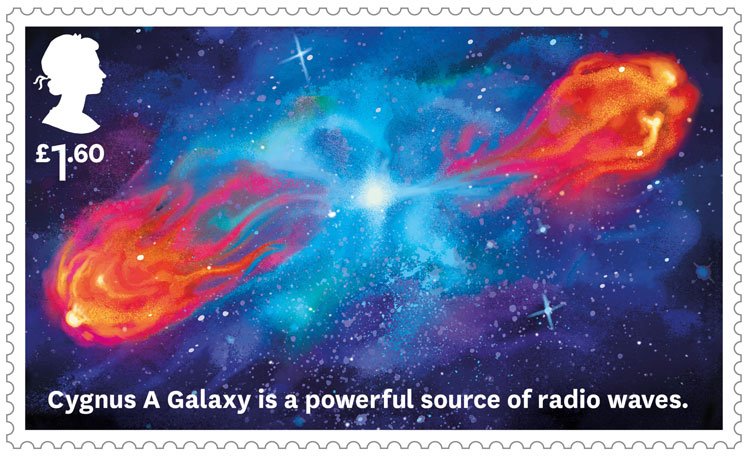 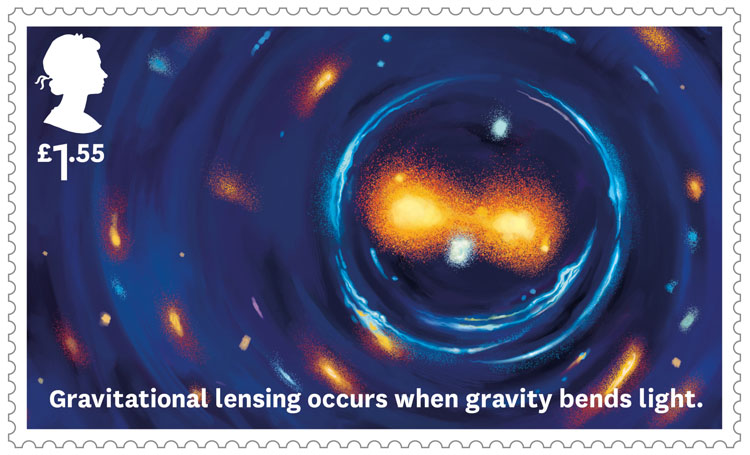 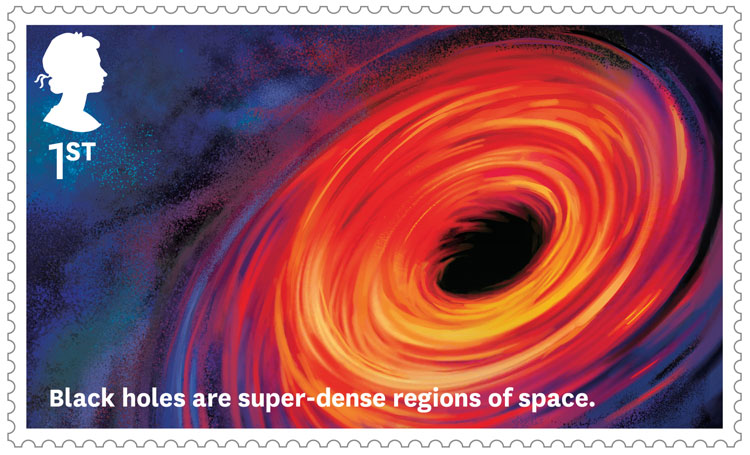 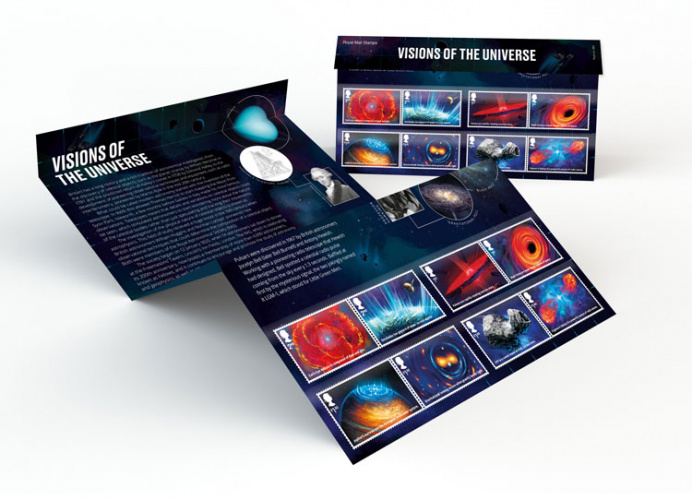