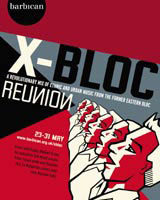 Cog Design has created an identity, leaflets, press advertising and microsite, www.barbican.org.uk/xbloc, for the Barbican’s X-Bloc Reunion festival. The festival is billed as a mix of ethnic and urban music from the former Eastern Bloc and the work takes its inspiration from Soviet era posters and reflects ‘the festival’s mix of old and new, traditional and revolutionary,’ says Cog managing director Michael Smith. The print literature is produced on uncoated stock to give a ‘tactile presence’ and a flavour of Eastern Bloc political flyers, he adds. The website, designed by sister company Dotcog, provides information, reviews and sound clips. X-Bloc Reunion runs from 23-31 May. The festival will feature artists from countries ranging from Eastern Europe to Afghanistan, says Smith. It will highlight ‘people’s interpretation of folk music’, he adds, with DJs from the Ukraine billed alongside Russian folk artists. Cog Design was appointed in February, on the strength of previous work for the Barbican.