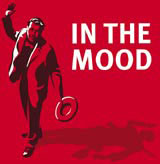 True North and Martin Reynolds Design have created the first temporary exhibition at the Imperial War Museum North, entitled In The Mood, which is scheduled to open on Saturday in architect Daniel Libeskind’s museum.

True North has created the identity and concept for In The Mood, in a project worth more than £150 000 in fees to the group. Martin Reynolds created the physical structure of the exhibition.

The exhibition explores the impact of wartime entertainment on individuals’ lives and covers four aspects in detail – song and dance, radio, theatre and cinema.

It focuses on four iconic entertainers from the First and Second World Wars – Glenn Miller, James Stewart, radio broadcaster Desmond Carrington and music hall star Vesta Tilley and is brought up to date with references to contemporary wartime entertainers.

The concept behind In The Mood is to look at how each entertainer shaped the life of another individual, says IWMN head of exhibitions Michael Simpson.

‘True North’s concept for In The Mood was “on brand” with [the museum’s] mission to illustrate how war shapes lives,’ he says.

True North was given access to the museum’s archive material, explains managing director Martin Carr. ‘We unearthed film and audio to tell personal stories of the effects that the four figures had on the lives of ordinary people,’ he says.

‘We ended up with an exhibition that was very strong graphically, which wasn’t planned, but reflects the stories extremely well,’ Simpson adds.

Martin Reynolds created structures for the show based on the canopies erected quickly to provide ad hoc wartime entertainment, which usually comprised a stage and curtains.

True North won the work after a creative, unpaid pitch last October against two unnamed rivals. It bought Martin Reynolds on board to ‘help turn concepts into reality’, says Carr.