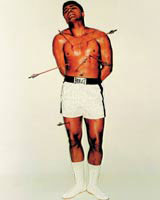 Let me make it clear from the start, I’m a big fan of George Lois. Ever since I discovered a copy of his gigantic tome The Art of Advertising (Harry Abrams, 1976) on a previous employer’s shelf, I’ve been glued to his huge ideas, seemingly crossing effortlessly between design, advertising and editorial, all the time fusing the wit, style and chutzpah and downright rudeness that only New York designers seem to be capable of.

Sadly, despite the dropping of countless hints, I was never given what had become my bible (not even as a leaving present), so had to track down my own copy second hand, at huge expense. Since then, we’ve had the more recent collection of his Esquire covers, and now his new tome, $ellebrity, just released by Phaidon.

As an introduction to Lois’ work, it functions pretty well. By isolating Lois’ trademark visual punches from the typographic environment they once appeared in (whether ad, pack or poster) the book has a pretty contemporary feel, remarkable considering some of the stories and pictures date back to the 1950s. Some may hanker after the original layouts – if you do you’ll have to scour Charing Cross Road for ‘The Art…’ (or better still tap it into www.abebooks.com).

The main spin of $ellebrity is, as the title suggests, Lois’ wrestling, wrangling and cajoling with countless celebrities over his long and illustrious career, and as ‘glue’ for the book it allows Lois to indulge in his other great passion, outrageous anecdotes.

Its innovative list structure and refusal to adhere to many principles of what constitutes ‘a book’ makes it an odd tome to read in one sitting, but I think Lois simply intends the reader to dip in and out to hoover up pictures and stories, returning later for another fix. Sometimes it’s a bit like an art directed edition of Hello! magazine, but the alignment of the book to the contemporary fixation with celebrity was surely intentional, so that’s probably a compliment.

While some of the ideas may not hit as many home runs here as in the US, Lois’ legacy remains the purity of his advertising images. The groundbreaking style of his Wolfschmidt vodka campaign (cleverly shoehorned into a separate section at the back of ’12 most favourable clients’), his moustachioed Svetlana, made up Richard Nixon and Andy Warhol drowning in Campbell’s soup – these are all marvellous, early examples of pre-Photoshop comping that then had to be painstakingly carried out by hand. His ability to fuse images together in seemingly impossible ways to make powerful, vicious or sometimes beautiful images remains unsurpassed to this day. (Which is odd really, since this is all so much easier to do now).

But while finishing a thought may be now easier, a truly original idea remains the start. And as Lois hints in his text, there’s definitely a sense that while many of the celebs he used were ‘game’, (apart from those outed in his ‘most obnoxious’ list) you’re left wondering whether any of today’s stars would ever subject themselves to some of the tortures Lois has put some of them through in the name of a great layout.

In these times of ‘picture and copy approval’ we just see the modern celebrity through their eyes, not ours. If we could still see them through Lois’ eyes, things would be so much more entertaining.

$ellebrity is available from Phaidon, priced £24.95

Michael Johnson is principal of Johnson Banks. He will be introducing George Lois at a British Design & Art Direction President’s Lecture at 7.15pm on 6 May, at Logan Hall, Bedford Way, London WC1