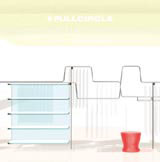 Gerard Taylor has created concepts for two shops-within-shop for Full Circle, to appear at the Selfridges store in Birmingham’s Bullring in September, as the fashion brand takes its first steps towards a stand-alone retail presence.

Previously sold mainly through concessions, Full Circle has mooted plans for a flagship store in London by autumn 2004. These two spaces in Birmingham – catering for men and women respectively – are essentially a dress rehearsal for Full Circle owner WDT group’s plans to expand the brand.

‘It’s a natural progression for a brand that sells very well,’ according to Gerard Taylor designer Carl Nichols, the project’s creative lead.

The brief was to create a signature retail style. Nichols adds, ‘The design is centred on a balance between being contemporary and artisan, fashionable and unique. [Full Circle customers] are not trying too hard, not super-edgy.’

The central feature of the Birmingham outlets will be a ‘thin, egg shell-like canopy’ that envelops each area. ‘When you occupy another retailer’s space, you need to make a reasonably bold statement,’ Nichols explains.

The materials used have not been disclosed, but Nichols says they will express the ‘witty, intelligent side of the brand’.