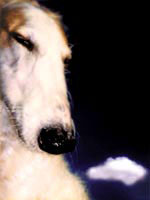 The Association of Photographers’ east London headquarters is, unsurprisingly, an excellent space to show photographs: light, roomy, and minimalist. Most shots look good on its bare concrete and brick walls, and the majority of those in its latest exhibition, The Summer Open, are no exception.

As the theme was completely open, the exhibition is a white elephant of portraits, landscapes, still lifes, reportage and nudes, to name a few.

Each photograph is viewed separately, with no context to bind it with another, and is, therefore, judged on its own merit. The quality is high and sub-standard photographs are easily punished.

The lack of constraints on the entrants to fulfil a particular brief means they can let their creative juices flow. For example, a close-up of a lupine dog with a wet nose, against a blue sky by Philip Brittan sits alongside Dean Marsh’s study of a waterfall with the American flag and tourists in natty waterproof headgear. Further on, a chubby boy bombs into the deep end at Saltdean lido in an evocative sepia photograph by Jonathan Topps.

But this eclecticism is also the show’s downfall. A single themed exhibition usually creates a more fulfilling experience. The AOP’s Well Heeled show, which has just been dismantled, had a consistent theme – footwear – explored in a myriad of different ways: a hare gets over friendly with a trainer, a cupboard is bursting with ballet shoes, footprints trail along a beach; there is even a montage of the day in the life of a pair of fuschia flipflops.

The result is more satisfying, particularly as the audience is flattered when it picks out any obscure references. In The Summer Open, there is none of this – you have to construct a sense of coherence from the hugely different offerings. A country landscape must be truly original and deftly executed to stand out. Portraits are easier to do well because people are inherently more interesting than trees.

That aside, there are some gems: an urban shot of a building front picks out, if you look closely, the tiny side profile shadow of a man’s face – immensely rewarding when you spot it and extremely beautiful. And black humour is evident in a photograph of a crucifix with a red light at its base hanging on purple, flocked wallpaper.

The aim of The Summer Open is, say the show’s organisers, to “encourage the highest standards of creativity within the AOP”. Athena-esque black and white romanticism aside, its first offering promises much for the future.

The Summer Open is at AOP, 81 Leonard Street, London EC2, until 19 August