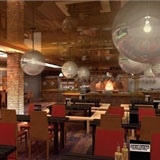 The desert kingdom of Dubai, nestled in the blistering heat of the United Arab Emirates, is basking in hype. Like other developing countries, such as India and China, the golden city is seen as a land of opportunity, where the quest for biggest and best is throwing up gargantuan design projects that are epic both in scope and scale, with budgets of the kind not typically seen on UK shores.

Designers have been quick to move out to Dubai and exploit the potential for work, which has been steadily growing since the 1980s, in synchrony with the emerging leisure, retail and tourism markets. Look around and satellite studios and start-ups stud the Dubai business district landscape, but up until now there has been little in the way of an organised network to support the burgeoning community and bolster the creative industries more generally across the Middle East. As Dubai’s hype reaches fever pitch, the nuts and bolts of actually cementing a formalised platform from which to promote local design interests internationally is a significant move, and testimony to an industry coming of age.

Moutamarat, a Dubai-based joint venture company, is overseeing the mission to implement a design infrastructure for the creative industries. Under its International Design Initiative banner, with a brand design by Winkreative, a host of design programmes will roll out over the coming years, the first of which will be the city’s inaugural design festival, scheduled to take place next year (DW 27 July). The International Design Forum will focus on industrial and urban design, comprising design workshops, conferences and exhibitions. The hope is that as the festival evolves it will gain a formidable international reputation, much like that of the Milan Furniture Fair, with the IDF potentially travelling to other cities such as Tokyo or New York. Other design projects on the agenda include plans to debut a series of seminal publications on design in the Middle East, establish Dubai’s first Arab Council on Design and build a design school that will offer degrees in graphic design, interior design, architecture and industrial design.

To help spearhead the initiatives, a Design Advisory Board is being established. Rodney Fitch, chairman of Fitch, sits on the panel alongside other industry figures such as Tyler Brûlé, Sheikh Majed Hamoud Al-Sabah, chairman of Villa Moda, and architect Rem Koolhaas. A full line-up of the board members will be announced later this month.

Fitch first visited Dubai 20 years ago and he marvels at its rapid transition into a ‘vibrant, hustling city’. He considers the design schemes being undertaken as ‘the first steps towards establishing an art, design, cultural and educational’ heart for the Middle East. ‘Dubai is translating from a building site into a design-conscious city and it should be applauded for creating such a platform,’ he says.

Steven Mitchell is a partner at Dubai branding consultancy Gregg Sedgwick. He has been based in the city for ten years and believes the actions of the IDI are urgently needed.

‘There are a lot of companies here, but many tend to plough their own furrow and chase the money. In general, not a lot of people socialise and the community is fairly disparate, with no unifying design scene,’ he says.

Mitchell believes it is only in the past five years that Dubai has ‘mushroomed beyond all recognition’. He describes the shifting face of Dubai, explaining how it has evolved over the years from a ‘design third world’ to ‘building a reputation through hype’, to finally delivering on its promises, ‘where the hype we once believed is actually happening now.’ Gregg Sedgwick has undertaken many branding projects in Dubai, including creating an identity for a chain of serviced residences called Nuran for property developer Emaar.

UK-based Keane Brands opened a studio in Dubai three years ago. The consultancy is working on a handful of interior and retail projects, including an Italian restaurant chain for property giant Jumeriah, called Sana Bontà. This is due to open in September, with three more sites set to launch in other UAE countries by 2007. Keane Brands was appointed to the project following a four-way pitch and has conceived the branding, interior design, menus and uniforms for Sana Bontà. The innovative concept – diners are offered a menu of ingredients from which they can make up their meal – is typical for Dubai. 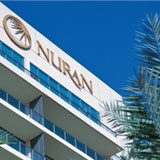 ‘Dubai doesn’t want copies. Dubai is a brand and acts like one,’ says Alastair Wright, managing director of Keane’s studio in Dubai. Wright believes the IDI is embarking on a ‘valuable’ mission and he speculates on the ‘lack of history, arts and culture’ in Dubai, which is in part driving forward such proactive schemes.

With many of the IDI projects still very much in their infancy, it remains to be seen if the schemes will cut through the hype and translate into workable solutions. Either way, given its reputation, Dubai is sure to surprise.

• Originally a small fishing settlement with traditional activities such as herding sheep and goats, cultivating dates, fishing and pearling

• The official language for Dubai is Arabic, but English is also used as a language of commerce

Finn finds future to be at Dragon