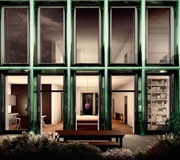 If luxury breaks are your thing, why not opt for a permanent holiday? Bethan Ryder previews a New York scheme designed by Herzog & de Meuron that brings the comforts and stunning surroundings of a top class hotel to your very own apartment.

Hotelier Ian Schrager has been busy working on a bohemian, arty interpretation of the hotel with the Gramercy Park Hotel in New York (designed by John Pawson and due to open this month). But in the meantime, he’s managed to lure Herzog & de Meuron into designing 40 Bond, also in New York, which aims to ‘combine home ownership with the amenities of a five-star hotel’.

Herzog & de Meuron partner Ascan Mergenthaler says the practice accepted the commission for two reasons/ because it was its first New York project, and to work with Schrager. The challenge for Herzog & de Meuron was the lack of room for manoeuvre; two years of negotiation with the City of New York planning bureau meant working with an ‘existing invisible envelope’. 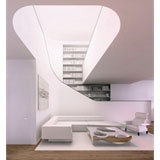 Located on Bond Street in Manhattan’s NoHo, 40 Bond contains 23 serviced apartments and five townhouses, and Herzog & de Meuron has gone for some grand ideas. Paying homage to the local cast iron architecture, the façade is wrapped in curved glass, which is hand-moulded in Barcelona. ‘We wanted to pick up characteristics of this architecture without mimicking it or making it a kitschy pastiche,’ says Mergenthaler. ‘It had to be a reinvention somehow, it was like stripping down the building to its bare essentials and then reimplementing them into a 21st century context.’

Most distinctive are the 7m high, 44m-long Gaudí-esque cast iron gates that shield the private front gardens from the street. Designed to maintain a visual dialogue between the property and the surrounding neighbourhood, these were initially inspired by New York graffiti tags, but Mergenthaler is keen to stress that this was merely the starting point. ‘They play on many different connotations. You see the wrought iron gate, you can see an organic growing structure that plays on many different levels, it’s not just a collage of graffiti tags because that would be boring,’ he says.

Internally, Herzog & de Meuron was responsible for what Mergenthaler terms ‘anchor spaces’. Most dramatic are the 6m-high Great Rooms of the townhouses, distinguished by gently sweeping sculptural stairwells. He is particularly proud of the proportions of the bathrooms – by concealing piping in the walls instead of the ceilings, he has managed to maintain lofty heights, with niches carved out for sinks, showers and baths. 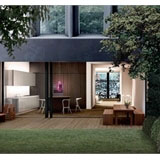 Although Herzog & de Meuron clearly prefers larger-scale public projects, it appreciates being able to work across the spectrum. ‘It’s fantastic to work on hotels and condominium buildings,’ says Mergenthaler, ‘although we only want to do a few special condos, not one after the other.’ He also points out that it is possible to ‘be more radical in hotel design, because people are only staying for a short time. You can individualise things that you can’t in condominiums, as then you’re superimposing something on people that they might not be able to deal with in the long term’.

Herzog & de Meuron is keen to make its mark in the hotel arena, and is working on a hotel in Lucerne. But Mergenthaler says, ‘This whole boutique and design hotel stuff that is popping up all over the place, we don’t think is so exciting. What we are trying to do is redesign, or remodel, or rework, traditional hotel furniture in a contemporary way. That’s the idea – now we have to make it real.’