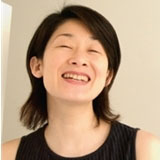 Tomoko Azumi built quite a reputation with her husband Shin, but she has gone from strength to strength since they parted, taking on design projects, teaching and research, says Max Fraser

Enter the workplace of TNA Design Studio in a suburban area of north London and you are met by a vision of total concentration, exhibited by half a dozen team members. This calming environment functions as the focal point of Tomoko Azumi’s design activities, where furniture, lighting, accessories, exhibition and interiors projects are nurtured, trialled, discarded, reworked, prototyped and finally released to a growing number of UK and international clients. Those clients are after a piece of Azumi’s refreshingly honest creative approach, where recognition and observation of everyday beauty and occurrences are embraced and reinterpreted into tactile, materials-led products and environments.

All of Azumi’s outcomes benefit from thorough research. This is coupled with the meticulous attention to detail associated with Japanese design. It’s a relief, therefore, that 13 years in London have not usurped the inherent sensibilities of Hiroshima-born Azumi. Attracted to the capital in the first place by its multicultural vibrancy and the prospect of studying furniture design at the Royal College of Art, she moved here in 1993 with her then partner Shin Azumi. 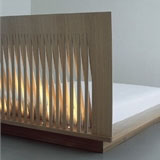 In 1995, the couple set up their professional partnership and it wasn’t long before fans were referring to them simply as the Azumis. Over the course of a decade, the duo tackled tableware, lighting, restaurants and exhibition spaces, as well as that mainstay of Western furniture design – the chair. They unfortunately decided to divorce quietly in early 2005, the complex personal and professional mix perhaps ultimately placing too much burden on the relationship.

Both set up independent studios, and Tomoko has spent the past 18 months readdressing her identity and creative motivations. While the pair divvied up their projects fairly, Tomoko has since pursued more exhibition design work, stemming back to her original training in environmental design at Kyoto City University of Art, where she first met Shin. One of her first solo projects was the design of a large trade fair stand for the newly launched Isos Collection from Furniture Works in January 2005, leading on to the design of the Craft Council’s touring exhibition Table Manners, a show of contemporary ceramicists that benefited from her prior product design experience.

Time on her own has inevitably given Azumi the opportunity to reflect on herself and her upbringing in Japan. She is revisiting old materials such as paper, celebrating the translucent qualities that reference the paper screens found in her traditional Japanese home. Transforming a flimsy, two-dimensional sheet into a three-dimensional structural object has informed space dividers for Isos’s 2006 stand as well as her pendant lamp designs for British manufacturer 2PM. Similarly, she created an artwork piece comprising a two-layer paper screen with silhouettes of Alvar Aalto’s Savoy vase that was commissioned by Iittala to celebrate the 70th anniversary of the iconic design. She keeps her hand in furniture with previous client Maruni in Japan, developing small tables to accompany the existing chairs – a nesting set with frosted mirror tops that reference her childhood memories of ‘the reflective surface of puddles after a rainstorm’. Further clients include Hitch Mylius and La Palma (for which she and Shin designed the best-selling LEM stool in 2000), and lighting for Japanese company Maxray. 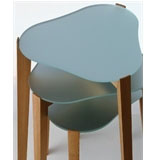 Azumi is currently collaborating with architects and landscape designers, on projects such as the remaking of a hospital courtyard into a rehabilitation garden in Newcastle. She is also creating furniture for an Italian company that has traditionally worked as a sub-manufacturer for many of the glitzy Italian brands, but which has now decided to launch its first collection of furniture in 2008. Azumi is also a research fellow at London Metropolitan University’s Digital Manufacturing Centre, investigating the 21st Century craft of rapid prototyping and 3D printing, and she spends one day of her week teaching on the Design Products course at the RCA.

Working across so many different disciplines, you sense Azumi is enjoying a new-found period of liberation and self-discovery on both personal and professional levels. By inviting new experiences in and gradually shifting into new fields, she now cannot, and should not, be inhibited by anyone other than herself.