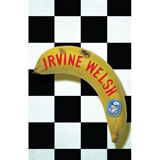 Random House is set to publish a series of innovative dust jacket designs this week for the launch of The Bedroom Secrets of the Master Chefs by the novelist Irvine Welsh.

A set of three book covers created by Random House creative director Suzanne Dean eschew the conventional book title in favour of tongue-in-cheek phallic graphics. The eye-catching covers are designed so they can be stacked side-to-side, forming one big display.

While the author’s name is emblazoned across the three jackets – one over a curving sausage, one on a banana and one over an asparagus spear – the only reference to the book’s title is on a small sticker attached to each item of produce.

Dean says the strength of the design and the complexity of the chequerboard backgrounds, chosen both for their culinary significance and to facilitate their end-to-end arrangement, precluded the need for a traditional title device. The technique of laying designs end-to-end in-store is increasingly used on-pack by fmcg brands such as Oxo, but has rarely been applied to book design and merchandising.

Promotional launches for Master Chefs to be held in London, Edinburgh and Manchester tomorrow will be based on the same graphic concepts. A series of 48-sheet posters and a legalised fly-posting campaign reference the designs, and teams of Welsh’s acolytes will be handing out bananas to the general public.

Dean says the conceit of having the fly, the wasp and the butterfly on the three items of food is a visual device she borrowed from still life painting. She painted the fly herself two years ago for the design of another book, she adds.

‘We decided to have three covers because that is a good number for displays – two is not really enough because they can compete too hard against each another. We’ll be keeping just the banana for future reprints though,’ she adds.

• Legalised fly-posting in Edinburgh and London

• Promotional campaign at the Edinburgh Festival