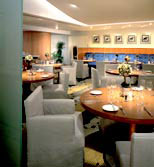 If you have developed a penchant for bland, badly-lit hotels, offering rude service, swirly-whirly carpets, patterned bedspreads, the Corby trouser press with its wood-effect cover and crockery decorated with nice floral patterns, you’re too late. The familiar, old-fashioned British hotel is facing extinction. These days it’s stark, Starck and modern art, Eames, themes and trendy magazines… it’s all about hospitality with personality.

The modern hotel has been a long time coming in the UK. A handful of brave pioneers were doing the contemporary thing a decade ago – leading the way were hoteliers such as Ken McCulloch, of No 1 Devonshire Place in Glasgow and the brilliant Malmaison chain, and Jonathan Wicks of 42 The Calls in Leeds. Gradually, a few other courageous souls dipped their toes in the water and discovered that guests positively liked modernity. And now even the big boys are joining in.

“Contemporary styling and idiosyncracy are being seen as branding tools,” says Patrick Reardon, chairman of RPW, an architecture and interior design group specialising in hotels. “The concept has been slow to catch on in the UK, but over the past three or four years we’ve witnessed enormous change in our hotel chain clients. They’re never going to go as far as Ian Schrager and Philippe Starck, but they are open to new ideas. This is one of the most exciting periods in hotel design for 30 years,” he says.

Reardon doffs his cap at the likes of Schrager, McCulloch et al for the inroads they’ve made, but also credits changes in the high street for the shift in public taste. “Look at the new shops, restaurants and bars. Customers love them. Even the home decorating shows on TV have made an impact – the British public is no longer intimidated by modern design,” he says.

One of RPW’s recent successes has been the refurbishment of the former Holiday Inn at Heathrow. It’s now the Crowne Plaza. “This really is an example of a large chain breaking the mould,” says Reardon. “When we first presented our ideas there was a sharp intake of breath – after all, when it was a Holiday Inn the interior was Tudor style, decorated with red brick and thatch. Our design is not modern for modern’s sake, it’s all about providing contemporary solutions and the guest response has been great. It’s now being looked at as a possible corporate standard.”

The one area that seems to be lagging behind is the hotel furnishing industry. “This supply industry really does have to sharpen up its act,” warns Reardon. “Few companies have caught up with the changes and that means that designers are turning to other sources of supply when they want something unusual. We’re also commissioning a lot more work, such as rugs and fabrics from contemporary designers – that was unheard of five years ago.”

The opportunity for commissioning individual items is relished by designer James Soane, a director of Conran & Partners, which is adding the finishing touches to the huge Conran Holdings-owned Great Eastern Hotel in the City of London.

“The personality of the hotel interior is based on the building itself. It’s Victorian, splendid and on a huge scale and to underline this we’ve chosen to use contemporary furniture and furnishings, some designed by us, some from the Conran Shop and then a whole collection of commissioned artwork,” says Soane. “We asked painters to create works in response to the building and commissioned photographers to bring their own interpretation to the City setting. There will also be a changing video installation for the atrium.”

Soane is convinced that guests are ready for this new approach. “The design is all about offering distinction, variety and surprises, because people want something different. It’s a long way from the old idea, born in the US, that chain hotels should all be the same, so when you book a Sheraton or a Hilton you knew what you were getting,” he says.

He’s also sure that the new personality-led approach pushes the old star rating system out of the window. “That was based on a box-ticking mentality, where rooms with two armchairs, a TV and a table won three stars no matter what they looked like. People want more than that now and hoteliers know that a good reputation is better than any number of stars.”

Contemporary art and furnishing is key to the character of the Celtic Manor Hotel in South Wales. “Inspiration has been taken from the new Welsh Assembly and the sense of a new Wales and a new optimism,” says interior designer Jane Goff of Goff Associates. The hotel, with its three international championship golf courses, is owned by businessman Terry Matthews, who now lives in Canada, but was born in the original Celtic Manor building during its time as a maternity hospital.

“The hotel celebrates Welshness, but, encouraged by Terry, we’ve been determined to look forward rather than taking a nostalgic approach,” says Goff.

In response to the clean lines of the contemporary architecture, furniture and furnishings are spare and modern. Featuring fresh interpretations of Celtic knots and designs are carpets and rugs designed by Patrick Goff and there is specialist joinery and metalwork by Jane Goff. Specially-commissioned artworks include two huge atrium wall hangings, commissioned from the Makers Guild of Wales and a marble sculpture by Peter Nicholas in the restaurant.

“It would have been predictable to put in grand paintings, but we’ve chosen a vernacular that celebrates ordinary people like miners and sheep farmers, in a contemporary style,” says Goff. “At all times we’ve adhered to the fundamental principals of providing hospitality and comfort, but it’s been given a fresh approach.”

For Olga Polizzi, design director of RF Hotels and owner of the much-praised contemporary Hotel Tresanton in Cornwall, the move towards Modernism in hotels can only be a good thing. “All that decoration and swirly-whirly carpeting in old-style hotels was often a disguise for poor hotelkeeping. In a contemporary interior there’s no longer any hiding place for dirt and mess – you can see marks on the carpet and the furniture and they must be cleaned up instantly. Quite rightly, guests really do expect a very high standard of cleanliness,” she says.

Part of the great hotelkeeping Forte family, Polizzi is sister of Sir Rocco Forte and both are responsible for building the distinctive new chain of RF Hotels.

Their first new project was the refreshing and uncompromisingly modern St David’s Hotel in Cardiff. Work is underway on the second major new building, the five-star Lowry Hotel in Manchester, which is due to open early next year. There are also refurbishment projects underway in Rome and Florence.

“Along with cleanliness comes simplicity,” says Polizzi. “Every hotel is different, but there are basic principles – using the best linens, simple flat-weave carpet, blinds instead of curtains, beautiful modern furniture – the less clutter the better. It takes more work to keep this sort of interior looking good, but judging by comments we receive, guests want something distinctive. No one wants old style any more.”