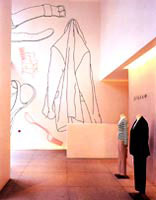 Where is retail design heading? Tackling the answer to such a complex question is daunting enough for anyone in the design world. If you also consider the amount of competition between UK retailers and the fragmentation of the retail market, the question becomes even harder to answer.

Rasshied Din certainly makes a brave attempt in his book New Retail, published by Conran Octopus, exploring all areas of the field, including the essential principles of retail design and the new types of retail environments. In addition, Din examines the practical implications for the future.

Even without the crystal ball perspective, this is, by anyone’s standards, an ambitious book given the scale of the subject, last tackled in depth back in the 1980s by Rodney Fitch.

The idea itself, from Terence Conran, is the second in a series of four books from Conran Octopus (the first, New Office by Frank Duffy, was published in l998). Two more, New Restaurant and New Hotel are still in the pipeline.

For Din, writing the book has been a learning curve. Two years ago, when he set out to tackle the book, written in collaboration with journalist Jackie Wills, he freely admits that, even as an established retail designer, he had no idea just how complex the subject would prove to be.

“When you are designing you never have that time to stand back and be objective,” says Din. “There are so many aspects of design which you take for granted as a designer – such a lot of information, for instance, is given to you – that in doing the book I was able to view it from a client perspective, as well as my own. And then I understood just how complex the subject is. Moreover, in exploring the topic you learn more about the complexity of the consumer.”

One key to the future of retail design, he says, is in understanding that consumers are now rejecting their former pigeon holes and becoming more individualistic, adding yet another layer to retail design’s complexity.

“We’re discovering that, where people were once ABCD in socio-economic terms, they can now be all these things at different times of the day. It’s no longer rich or poor, there are so many grey areas in between,” he says.

In a world where e-commerce is being treated as the holy grail in many quarters, it is refreshing to learn that Din’s view is more muted. In researching the book, he decided that e-commerce will not be taking over just yet.

“It will be a lot more influential, but it won’t dominate,” he says. “How many households will actually have a PC and know how to use it? I’m 43 and most people of my generation would not necessarily want to use it. The perception is that everyone under the age of 20 has a computer or access to one, which isn’t quite true. The forecast is that by the time these people are older and spending money, everything will be done on the computer – that isn’t true either.

“It’s going to take ten or 20 years before it has the impact that is predicted. The killer format will be coming from TV. And that’s when I think it will become more interesting and invade every household.”

The book’s retail space case studies are eclectic. As well as the expected UK examples – Boots, Bluewater, Jigsaw, Selfridges – there is a strong international flavour which balances the conventional and the less formal. Shanghai Tang, a highly successful Hong Kong speciality store is featured, as is the unconventional glass faÃ§ade of the new Comme des GarÃ§ons store in Tokyo (created by UK practice Future Systems) or Opaque, in Tokyo’s Ginza district, a Japanese “high street” store with an unmistakably futuristic presence. “It’s a really odd collection, but what excites me about all of them is that you feel there’s an individual concept behind them. They are all trying to say different things, but doing it in a way that engages the senses,” Din explains.

Din says he also opted to use lesser known examples for their inspirational value. Corso Como, for instance, is a retailers’ retailer – the shop is divided up into seductive galleries. “Corso Como is very difficult to get to, but people in the business know about it. I’ve also used Egg in Kinnerton Street [London], which is tiny. Yet nearly every fashion editor in the world probably ends up there at some stage.”

The inclusion of Biba is of great historial value. “There was a lot of discussion about its relevance,” says Din. “At the time, it was out there on its own but it was virtually the first retailer to encompass everything in terms of brand and lifestyle – it did in the 1970s what the big brands do now.”

The book acknowledges that design retailing will become more and more challenging in the future. “Technology alone won’t capture consumers,” says Din. “In order to encourage people to come to you, you’ve got to work that much harder. Clients have to be so much better than they were ten years ago because of the competition from all the other sectors, as well as other retailers.

“The integration of technology and people is where the future lies. You leave the house because you want to be stimulated in some way – and the computer can’t do that.”