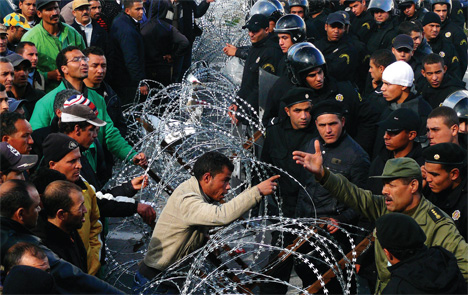 The grainy images of smoke-filled Tube carriages in London on 7 July 2005 are memorable not only for their devastating impact, but also for marking the unofficial start of a new kind of reporting – ’citizen journalism’. Armed with new camera phones, witnesses to the carnage e-mailed their photographs to news outlets, capturing the moment better than any professional sent to cover the story could have done.

Fast-forward five years and citizen journalists are part of mainstream media. Amateur bloggers are rife, and photographs taken by so-called ’street reporters’ are finding their way on to the front pages of major news vehicles, including The New York Times, The Guardian and Time magazine. The burning question is whether citizen journalism is a passing fad, or represents a serious threat to professional photography.

One photographic agency, Demotix, is doing particularly well out of citizen photographers. Demotix is a self-styled ’street wire’ that invites amateurs to upload their pictures for publication by newspapers and magazines worldwide. Its first front-page picture – in The Guardian – was of Ian Tomlinson, who died at the G20 protests in London in 2009. Demotix’s biggest-selling photograph to date is a barely-in-focus snap of Henry Louis Gates, the Harvard University professor who was arrested for disorderly conduct in 2009, which led to a national debate about race and culminated in Gates and the arresting officer having tea with Barack Obama.

Both pictures were taken by amateurs, the latter by Gates’ neighbour, a retired banker. It made the front cover of Time magazine and the Oprah Winfrey show. ’The Gates photograph is remarkable for its immediacy, not its composition,’ says US-born Jonathan Tepper, co-founder of Demotix with Turi Munthe. ’He caught the moment.’

But surely you cannot sustain a business on a handful of lucky photographs taken in the right place at the right time, and surely not everyone signed to Demotix – around 18 000 photographers – is an amateur armed with an iPhone?

’We don’t ask our photographers whether they are amateur, professional or a bit of both,’ says Tepper. ’There’s a blurry line there. And we don’t vet people – we judge them solely on their photographs. With editorial photography, it’s all about being in the right place.’

The bigger agencies work exclusively with professionals, but is Demotix’s use of citizen photography threatening real professionals? ’Good professionals will always have work,’ says Tepper.

’It’s fair game – you can’t stop people taking pictures with mobile phones,’ says David Levene, a news and features photographer for The Guardian. ’You can be immediate with a small camera, but it won’t be as skilful a shot. Citizen journalism is just the odd lucky photograph once in a while. I just have to trust that my paper will show a certain amount of loyalty to me.’

The year 2010 was a big year for breaking photographic stories – from the Icelandic volcano and the Haiti earthquake to the World Cup and Greek riots. The financial crisis in particular was good for citizen photography, Tepper says. With major news events like these, professionals are competing against anyone with a camera.

At the end of last year, Prince Charles and Camilla were snapped in their Rolls-Royce in the thick of the student riots. Despite tens of nearby protesters also armed with cameras, the money shot that appeared on every newspaper the following day was taken by a professional – Matt Dunham from the Associated Press. ’We were here until 11pm,’ says Ossie Ikeogu, Demotix editorial sales manager. ’We had hundreds of pictures sent in by protesters.’

You can be immediate with a small camera, but it won’t be as skilful a shot. Citizen journalism is just the odd lucky photograph

Dunham admits he was competing against non-photographers in the thick of the crowd. ’There were a couple of people taking pictures with their mobile phones, but I knew I was the only newspaper photographer around,’ he says. ’I had previously turned off my flash because it had attracted protesters who had tried to wrench my camera away. But the light was so bad [by the time Prince Charles and Camilla appeared] it would have been impossible to get a shot inside a car without it. So I turned it on and took five pictures.’

He was lucky, says Levene. ’With something like the student riots, you work really hard, chasing the news story, and then someone else gets the one shot and it’s everywhere – you have to harden yourself to that.’

Established organisations and professionals still have the edge on big stories, admits Tepper. They have larger budgets, and can get accreditation easily. ’A story like the Chilean miners will be saturated,’ he says. In these instances, the key is to get off the beaten path and find out what else is happening in that part of the world.

This is Demotix’s big selling point, suggests Tepper. ’We have a vast network of local photographers on the ground. They have a different perspective than Westerners have and can often get access they can’t. Commissioners come to us now, particularly for tricky shots,’ he says.

This global reach is something that, since the economic crisis, most international media outlets can no longer afford. Perhaps the debate isn’t about amateurs versus professionals. It’s about capturing an important moment in the best way possible. And anyway, a little competition never hurt anyone.