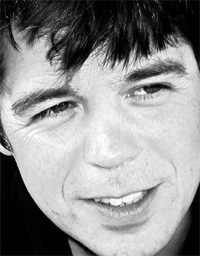 The average designer’s toolkit used to be a simple one. All that was required was a nicely sharpened pencil and a large piece of paper. A new tool arrived in the mid-1990s when the digital revolution brought us interactivity. This was an exciting new toy to play with, although one that some brands found difficult to work with until more recently.

Many agree that we’re in the same place now with social media as we were with digital in the mid-to-late 1990s. In those days we spent a lot of time explaining to clients why it would be advantageous to have a website, and now we’re telling clients why they need to use social media to start conversations with connected people. Of course, now we’ve got a new set of tools to add to the box: data, location and time. This toolkit allows us to create meaningful content and currency (in old words, campaigns and brand activation), which drive conversations between brands and people.

If banks have one thing, it’s a lot of data. HSBC’s First Direct started using social about a year ago with a great idea to start conversations online. Using a wide range of platforms including Twitter, the online bank aggregated sentiment to create a dynamic infographic that charted positive and negative comments from customers. The tool included functionality to allow the bank to post and respond to questions and comments. It was a nice way to start a conversation with customers and customers-to-be and First Direct deserves full marks for being the first bank to make such a move.

World Wide Web inventor Tim Berners-Lee has been pushing the value of data for a couple of years now. At the 2009 Ted conference he spoke passionately about the need for ’raw data now’, urging governments and organisations to release their data on the Web, allowing third parties to mash it all up. The open-source platform Ushahidi, for example, has developed open-source software that uses crowdsourced mapping data to help emergency response workers in disaster areas.

Ushahidi benefits from the spread of smartphones and GPS/3G technologies to provide live, on-the-spot information-sharing. This leads us nicely to social’s second tool, time.

The single best example from last year has to be the much-reported and blogged campaign for Old Spice, using Facebook, Twitter and You Tube to engage in real time with followers. Instead of simply responding to tweets and comments with text, the Old Spice guy filmed responses to specific individuals throughout July 2010.

The campaign wasn’t just a win for Old Spice and agency Wieden & Kennedy; It opened a conversation between consultancies and clients and created a precedent for stronger relationships and greater trust. And despite initial reports that Old Spice sales were down, a report from Brand Week showed a body wash sales increase of 55 per cent over the previous three months, and 107 per cent during July. The viewing figures of the Old Spice videos that have been reported have been huge – 110 million at one point. This is an incredible number.

Just before Christmas, Dutch airline KLM launched a campaign that uses real-time GPS technology to spread a bit of happiness among its customers before their flights. KLM Surprise encouraged passengers at Amsterdam’s Schiphol Airport to check in on Foursquare and Twitter, delivering a personalised treat to those that did so before they boarded their flights. In a year when Mother Nature unleashed all kinds of problems on travel operators, a simple tool helped brands stand out through creative thinking and active listening.

Location is being used in increasingly interesting ways. Social media has been viewed as an online experience, but that couldn’t be further from the truth, especially with the technologies available to us today.

For example, fans of fashion label Clemens en August can only visit its stores at selected times and places because the collection travels around Europe and the US, popping up for three days at a time in contemporary art galleries. If you miss it, it’s gone until the next season.

Opened on the premise that Americans should enjoy a better bathroom experience, Procter & Gamble’s Charmin Restrooms – the ’Disney of restrooms’ – in New York City has opened during peak holiday shopping periods since 2006. Charmin has claimed that about 1.5 million passers-by have visited the restrooms since 2006. This is a brand on a roll.

The exciting thing about social media is that it’s evolving daily and new technologies will allow us to experiment and engage in whole new ways, be it because of the widespread uptake of tablets to the use of facial recognition technology. What is critical to keep in mind, though, is the point behind it all. The new toolkit helps designers to craft conversations, but if the content and currency behind those conversations is without value, the response will be a big, fat fail.