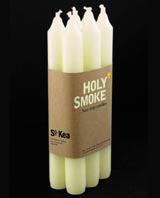 In the 1970s Britain’s favourite Christian, Cliff Richard, crooned ‘Why should the Devil have all the good music?’. Thirty years on, in an age where style is at least as important as substance, you could be forgiven for asking why the Devil should have all the good branding too.

With church attendance falling and confusion rife over the Church of England’s stance on issues such as homosexuality, it seems the Church needs the kind of image overhaul generally deemed more befitting of less divine ‘products and services’.

Although 21st century attractions that arguably divert potential worshippers’ attention away from spirituality – football, PlayStation, pop music – are slick with branding’s glossy sheen, God, it seems, has always considered Himself above calling in the professionals.

That said, recent developments point to a growing awareness among religious organisations of the need to scatter a little design gold dust.

But is it possible to brand God and can the Church really be sold to people in the same way as commercial services?

According to The Field managing director Simon Barbato, to talk of branding religion as such is to miss the point.

‘Theology is sacrosanct and it would be criminal to rebrand a belief system,’ he counsels. ‘Where the work needs to be done is in repackaging how it is delivered to the congregation and beyond.’

‘The best ambassadors for the Church are the congregation,’ notes Barbato. ‘If we can unite them and create a strong sense of purpose and belonging then we’ve met an important objective.’

It is at individual congregation level that the Church of England feels it is most appropriate for any type of branding exercise to kick in, citing itself as too much of a ‘broad church’ to enable an overarching ‘corporate’ branding.

‘There’s no way to produce a simple brand that says, look, this is the Church,’ argues a Church of England spokesman.

‘The CofE encompasses so many different ecclesiastical groups. You can put a black wrapper with red writing on a Mars Bar, but if you try that with the Church of England you end up with a box of Quality Street,’ he says.

It is a point echoed by Interbrand group deputy chairman Tom Blackett, who contrasts the diversity of the CofE to the brand strength of other religions.

‘Look at the Mormon faith; it’s simple and fundamentalist. You know what you should expect and, let’s face it, branding is all about consistency.’

The Christian church does have one of the oldest and most recognisable logos out there in the shape of the cross. And, as Landor Associates executive creative director Peter Knapp notes, this is bolstered by a host of iconography crying out to be exploited in a marketing context.

‘The religious world has some of the strongest brands in the history of mankind. All that symbolism is deep-rooted in the human psyche.’

The problem, suggests Knapp, lies in the Church’s reluctance to deliver those icons to the mass market through more up-to-date channels.

‘Thirty years ago the Church sold itself through youth clubs and village halls. But the Church now needs to be persuasive in a different, “MTV” market. It needs to fight the fight in the mainstream advertising arena.’

And, insists Knapp, that needn’t mean disengaging from the existing messages. Those billboards you see featuring quaint, ‘God Loves You’-type slogans outside churches, he claims, reflect a rich history of ‘great and engaging copywriting’.

For instance, in a range of merchandise created for St Kea Church, Adamson ‘reclaimed’ Christian expletives and exclamations in slogans such as ‘Bloody Hell, you’d better believe it’, ‘God knows who I am’ and ‘Holy Smoke’.

And elsewhere, the Church’s traditional purple hues were matched with more unconventional colours, while conventional Gothic typography was kicked into touch. ‘We avoided the religious visual clichÃ©s by mixing the traditional in with the non-traditional,’ offers Adamson.

Adamson concedes that he met some congregation dissent in the early phases of the project, but says his ideas were swiftly embraced once people got beyond the ‘strong’ language and appreciated ‘the bigger picture’.

There is clearly a good taste tightrope to be negotiated when embarking on religious branding, but that needn’t act as a deterrent. And as Lin Arigho, managing director of Aricot Vert, which last year spruced up the Scripture Union’s image points out, the Church avoids branding at its peril. ‘Ignore it,’ she warns, ‘and you end up with The Vicar of Dibley as your figurehead.’

‘As a symbol, in the most basic graphic terms, the cross is hard to beat. It combines a vertical stroke (dynamic, active) with a horizontal (passive). It couldn’t be simpler. You can mis-draw it yet it remains perfectly recognisable. It’s also easy to reproduce at any size, in any material.

‘The story behind how it came to exist is pretty strong too. It’s surely this that gives the cross its real strength: the emotion it evokes. It has the most complex associations, the most extreme values of any symbol in the Western world.’

Trevail’s resignation is fuel for large vs small debate