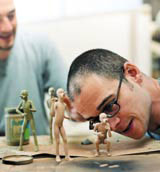 Anyone who has ever played chess can understand its allure; part game, part power struggle, the exhilaration of playing can infect you like a virus. Yet there is also a strong aestheticism associated with the game, undoubtedly evoked by the linearity of the layout and the symbolism of the pieces, medieval symbols of cavalry carved – at their best – in ebony and ivory. The marriage between chess and art is being dutifully celebrated at the Gilbert Collection in Somerset House with The Art of Chess, an exhibition featuring 19 chess sets designed by artists in the past hundred years.

The show is the first project of RS&A, a design/art consultancy group set up in 2001 by Julia Royse, who started the gallery White Cube with Jay Joplin, Mark Sanders, founder of Dazed & Confused, and Francesca Amfitheatrof, a jewellery and product designer who works for fashion label Marni, Asprey Garrard and Alessi among others. Backed by financial investors, the three have turned their individual talents to promote the production of projects across different spheres that wouldn’t normally see the light of day.

For the Art of Chess, they commissioned five artists to produce each their own set – and answering the call are Damien Hirst, Jake and Dinos Chapman, Paul MacCarthy, Yayoi Kusama and Maurizio Cattelan. Each set, made in an edition of seven, is individually crafted in materials such as wood, glass, silver and porcelain. ‘Each has its own technique and a lot of it has been produced by English craftsmen,’ explains Amfitheatrof, ‘It’s exquisite work.’

Hirst’s Mental Escapology set reprises his pharmaceutical theme with a surgical trolley laden with glass and silver cast pill bottles with etched silver labels. A free-standing medicine chest also completes the sculpture. ‘Damian looks at chess as a game of power, and medicine corporations are enormously powerful,’ says Royse. A humorous set comes from the Chapman brothers who have created a series of ‘post-apocalyptic’ adolescent figures with their trademark penis noses and orifices mouths.

The white side is represented by an army of Arian white bronze figures with windswept asymmetric haircuts while the hand-painted black side dons incredibly realistic afros. The day we meet, Sanders has just returned from the wigmakers to collect the wigs that will then be styled by a fashionable hairdresser. He says that interestingly no-one of the commissioned artists has produced a conventional chess set.

To keep the healthy competition going, he’s refused to tell each of the artists what the others are doing with the consequence that each believes their set will be the best, he says.

The art connection has illustrious predecessors, most notably Marcel Duchamp. The father of modern art was apparently so obsessed by chess in the 1920s that his professional involvement in the game caused many to believe he’d ceased his artistic activities altogether. He even played in the 1920 chess Olympiad. On show are two of his sets, one equipped with travelling foldaway, and a pocket set with leather wallet, celluloid pieces and ingenious pin attachments.

Russian craft is present in all its glory, most notably with a luxurious 1905 FabergÃ© and the 1925 Propaganda chess set, officially known as The Reds and The Whites, but more commonly called Capitalists versus Communists. Each set in the exhibition acts out a move in the apocryphal last game played by Napoleon with General Bertrand on St Helena in 1820. So spare a thought for the curators and technicians who have installed it.

The Art of Chess is at the Gilbert Collection, Somerset House, London WC2 until 28 September