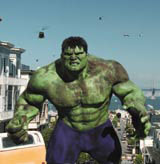 In its TV incarnation, The Incredible Hulk was memorable not for the guy who played Dr Bruce Banner nor the pedestrian plots, but for those deliriously funny-scary moments when Banner’s eyes went all yellowy, his skin turned a sickly shade of green and he started to burst out of his clothes. It was exactly the same routine every time, but there has always been something irresistible about the idea of a man-made monster made flesh. Think of Frankenstein, Jekyll and Hyde, and all those schlocky werewolf B-movies of the 1970s and 1980s.

Ang Lee’s blockbuster film version may have a lot more to offer than the 1970s TV show in the way of special effects, but that sense of tortuous anticipation remains the same. ‘Cut the crap and bring on the big guy,’ you find yourself thinking every ten minutes or so. Since the idea of a man transmuting into a monster is also inherently silly, Lee’s biggest challenge was to prevent the film becoming risible. This may explain why it is so heavy going. The merest hint of light relief and we may never have stopped laughing.

Of course, it is just possible that some of us may not find the sight of a 4.5m-tall snarling green man-monster discreetly equipped with purple Lycra shorts (for fear that we should catch a glimpse of his monster member presumably) entirely plausible.

For the benefit of these miserable sceptics Lee and his team of writers have done their utmost to justify Banner’s transformation scientifically, with a lot of incomprehensible goobledegook about gamma radiation and genetic modification.

Frankly, my dear, I didn’t give a damn. It’s a fantasy based on a comic strip, for God’s sake, about a guy who turns into a rampaging monster when he loses it. In these times of road rage, air rage, teen rage, wrinkly rage, you name it, this is a concept most of us will have no difficulty taking on board. As man-monsters go, Lee’s computer-generated Hulk is pretty damn scary, smashing everything in his path, twirling tanks round his head by their gun barrels, and leaping into the sky to mangle passing helicopters the way you and I might scrunch an empty Coke can.

Like Spiderman, there is an intriguing psychological dimension to the Hulk which, under Lee’s direction, often threatens to undermine the film’s claim to be an action drama. You feel the man who made the superb Sense and Sensibility and Crouching Tiger, Hidden Dragon was probably more interested in Banner’s multi-personality disorder than the exploits of his monstrous alter ego.

The Hulk’s creators from Industrial Light and Magic have succeeded brilliantly in making him simultaneously monstrous and human, while retaining more than a passing resemblance to the actor Eric Bana, who plays Banner, only three times his normal size. They also found ingenious new ways of connecting the real-life action to the CGI, enabling Nick Nolte, as Banner’s mad scientist father, for instance, to stroke the Hulk’s cheek at one point. There are times when action is sacrificed to artistry and I suspect that will irritate the Bruce Willis tendency. But the CGI work is awesome and there wasn’t a derisive titter to be heard at the press screening I attended.