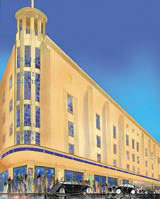 Design work across six existing and one new-build theatre includes the refurbishment of bars, auditoria and entrance areas; the design of bespoke products; and improved lighting and wayfinding. Interiors work is being led by Arts Team @ RHWL interiors head Clare Ferraby. The team is the theatres arm of RHWL Architects.

The two most ambitious projects are the £7m refurbishment of the Prince of Wales theatre on Coventry Street, and a £20m major reinvention of the Queen’s and Gielgud theatres. A communal foyer will link the two and an elevated, 500-seat studio theatre, the Sondheim – the first new theatre in the West End for 70 years – will perch on top of both venues.

Work on the Prince of Wales theatre kicks off in September, scheduled for completion next spring. The aim is to create a ‘contemporary interpretation’ of the 1930s building and address the ‘nightmare’ circulation and ‘boring’ auditorium, says RHWL senior partner Nick Thompson.

The auditorium is being redesigned to conceal the ‘litter’ of untidy lighting, adds Ferraby, who is introducing a colour palette of gold, bronze and copper.

Other public areas, including front of house and the American and Delfont bars, will feature curved lit glass and zinc throughout. The look is ‘smooth and chic, modern 1930s with a touch of cruise liner’, Ferraby says.

A prototype seat, featuring a bespoke fabric in chenille and viscose ribbon by specialist manufacturer Bute, is designed to maximise space in the auditorium, but increase comfort, she says.

Externally the facia, designed by Robert Cromie in 1937, will be improved with transparent materials and blue lighting to accentuate and ‘release’ the iconic corner tower, says Mackintosh.

Design and architectural work on the Queen’s/ Gielgud/ Sondheim site starts in 2006. The Queen’s Theatre’s existing interiors were designed by Hugh Casson and date back to 1959. According to Thompson, designs for the new-build Sondheim are currently being worked up, and include roof-level views over London. The theatre aims to accommodate extended runs of musicals and plays transferring from smaller non-West End theatres.

Interiors at the Strand Theatre, including the renamed Novello Bar, will be reworked to expand public areas and ‘recreate the glamour of the original’, says Mackintosh. Work starts this month.

Arts Team @ RHWL is also redesigning the entrance and auditoria levels at the Wyndam’s Theatre, and seeking to improve public circulation and increase bar capacity at the Albery theatre.