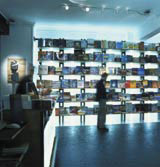 Magma stores always look busy (none of them are large), and there is a growing sense of the chain becoming an arbiter of what is hip in design, without becoming in the least bit elitist or rarefied. Magma’s success is based on a rare combination of good buying policy, a human-scale layout conducive to browsing, and informed, friendly service. It reminds me of a pre-megastore record shop; the sort of place where you could wander in, hang around for as long as you liked, sample the goods and get tips from knowledgeable staff. Valli, Montse and their team seem to have created that most desirable of retail attributes – a community. It’s something attained by only a handful of messiahs of the cash till.

Magma has recently launched a design magazine. Called Graphic, it is big and chunky, stuffed with the doodling of ultra-hip graphic artists. It further emphasises the notion of a Magma community, and is part of Valli’s strategy to expand the Magma concept. A new store in central London is currently being planned. It will not be like the existing ones.

‘We would like to grow into something new, something different,’ says Valli. ‘I want to come closer to creating the shop that could one day, maybe, shake things up. To do this will mean exploring new areas, selling culture and creativity in all its various forms.’

Valli knows the benefits of keeping in close contact with his customers. ‘I like working behind a till,’ he says. ‘It’s a very interesting place. You can learn a lot by looking at the world from behind a counter.’