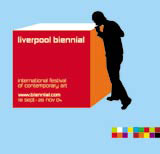 The Manchester consultancy was initially drafted in to handle the event’s advertising campaign, but also became involved in consolidating the brand image. ‘We realised that they didn’t have a strong visual identity and so our work became more than just a campaign, [widening] to be a proper branding brief,’ says Love account director Alison Johnson.

Previously, the Liverpool Biennial had adopted a project-by-project approach to its branding. Johnson says that this weakened the brand’s activities in the periods between the two-yearly events.

Love Creative has augmented the 2002 event’s coloured block logotype to create a stronger, more consistent brand, intended to raise public awareness and recall. ‘The squares were very inspirational to the design,’ Johnson explains. ‘We developed the main 3D block and bold colours from the style of these blocks.’

The third Liverpool Biennial runs for just over two months, beginning on 18 September. Spanning the entire city, and produced in association with Liverpool’s major visual arts organisations, the event has previously attracted more than 200 000 visitors.

Love’s creative work will appear first in a press campaign in June, followed by outdoor advertising activity. The consultancy has also developed the branding for brochures, invitations, external banners and signage.

Love creative director Dave Palmer led the project, which was secured by invitation from Liverpool Biennial.