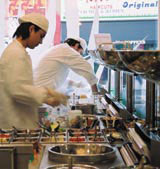 By summer 2002 they required design work for their salad retail concept. ‘We realised that although we had 85 per cent of the corporate identity, created by friends who were graphic designers, we knew we would have to employ [a consultancy] to get a proper job done,’ says Hill.

The pair was put in touch with The Formation through their sign-makers, Total Frontage. ‘Other than word of mouth, there are not many ways of finding out about designers,’ says Hill. ‘We didn’t look at other consultancies. We appointed The Formation on the strength of both its client list and its proposal.’

The Formation designed a generic concept store to fit any location, as there was no site nailed down at the time. The first outlet opened last summer on London’s Goodge Street.

‘The design costs ended up being more than we expected because the project was longer than first imagined,’ says Hill.

He is wary of suppliers taking advantage of him and Wheatcroft, as newcomers to the game. ‘We experienced a lot of people wanting to expand their repertoire with us. The Formation did all the design work, but had I realised that interior and graphic design are two different disciplines, I would have got interiors specialists to do it.’ He now uses P Milburn Design for interior and graphic design.

The Well Dressed Salad Company is about to open abroad on a franchise arrangement, with further central London outlets planned this summer.