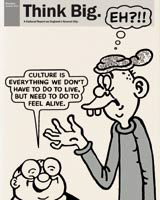 The Chase in Manchester has designed an A1 newspaper format brochure for Preston City Council entitled Think Big. Using anecdotes about life in Preston, the work illuminates the city’s five-year leisure plan, after it was awarded city status at the Golden Jubilee. The cover, pictured above, pays homage to The Bash Street Kids. The comic strip appeared in popular comic The Beano, which was created by Prestonian Leo Baxendale. The Chase creative director Ben Casey says the idea behind the designs was to have, ‘the nuts and bolts information at the top and bottom of the pages, but in between we thought we would use poignant illustrations and have a bit more fun’.

Chaloner back with Conran