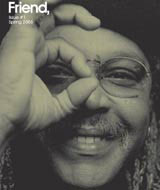 Friends of the Earth is launching a lifestyle magazine called ‘Friend,’ created by Plan-B and Makgill, in a bid to target a cosmopolitan, urban audience.

Plan-B was appointed following a four-way pitch in December. It has created the name and look of the magazine, taking some ‘quite radical steps away from its usual brand’, says Steve Price, founder and art director at Plan-B.

The Friends of the Earth logo has been tweaked to take the form of a single ‘O’ and the title ‘Friend,’ which includes a comma, was used to make the magazine feel more like a letter or personal note. The typography anchors the magazine, allowing for different image treatments, Price explains.

The A5 magazine will feature news, arts, culture, sport, politics and celebrity interviews. It will be published three times a year and is aimed at 25- to 35-year-olds. It will be sent out to existing members, but there are possible plans to hand out the magazine on the streets.

Friends of the Earth publishes its supporter magazine, Earthmatters, recently revamped by BWA Design, and Change Your World, a magazine for its volunteer groups.