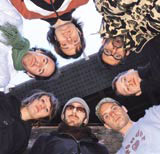 Has it really been 18 months? It can’t have been that long since All of Us broke from Digit, spinning quietly off to South London, away from the hordes. Perhaps that’s why it feels funny going to visit the group. Not because its Glasshill Street studio is so unassuming – so un-Hoxton – slotted under a railway arch between Elephant and Castle, Borough and Southwark stations. An L-shape, hidden somewhere you won’t quite remember, lost in the Tube triangle. But that’s not the only reason it feels strange. A sense of unfamiliarity is pervasive just now. It’s almost as if you can feel we’re on the cusp of something different. Something not quite formed. Hatching. How big will it be?

What’s strange is, this has happened once before: going to see Nick Cristea, Simon Sankarayya, Phil Gerrard, Mickey Stretton and Orlando Mathias for the Design Week grand prix profile.Back then it was 2001 and Digit took the best of show for MTV2 On Air. It can’t have been four years ago since we did the interview for that? Yeah it was that long ago. Maybe it feels like less time because the rest of the industry has been running to stand still.

Back then, in the Hoxton years, was where it all came together, next to the old Blue Note nightspot, the Lux Cinema, the White Cube2 gallery. That’s where they learnt their strengths and weaknesses, as a pioneering gang of creatives operating underground. Carving out the digital space of Shoreditch. It was the basement of Digit that brought them all together eight years ago. They not only became the engine room, the A-Team (‘Don’t print that!’) learned to operate as one.

Realising who they were was the first step. Spotting the future was the next. That was when they came up with the plan to run their own show. The split with Digit was amicable – well, as amicable as splits ever are probably.

All of Us’s inception was a bold enough move. ‘Leaving safe industry jobs’ and ‘starting with nothing, no real money to put into a business’, as they point out. But then they also went and set themselves the challenge of putting right everything that was out of kilter with the ‘interactive’ design consultancies around them. Get design in front of commerce. Get quality in front of profit. And get ideas in front of process. There was no ‘safe option’. Instead of relying on the on-line world – redesigning websites for bread and butter – the newly formed group would aim to hook up with the physical world, too. The group wanted to make the connection, creating a real world realm for its brand of technological creativity using screens, installations, exhibits and physical environments. Using just about anything to hand, in fact.

That was the plan. That was all 18 months ago. ‘We’re in our second phase now,’ says Mathias. ‘The first phase was about trying to put the plans into practice. But now we’ve established ourselves we have a much better idea of what we can do and where we can go.’

The consultancy’s results have certainly been spectacular, both in design and in business terms. The Energy Wheel at the Science Museum put the group firmly on the map, but since then it has been working on a string of top briefs: Sony Aiwa, of course, but also Selfridges, Thomas Pink, Motorola, Sky, PlayStation, O2, the list goes on. And that’s not forgetting the philanthropic environmental design for the NHS, and an event for Great Ormond Street Hospital. Not only did All of Us hit its two-year turnover projections in a mere three months, it found that the real world gave it a canvas as large and flexible as it could imagine. Something that cyberspace never quite could.

So what’s next for All of Us? The group would love a workshop, so it doesn’t have to keep borrowing bits and pieces from the guys like Redjacket next door. ‘A lot of the things we have done involve a lot of product design as well as computers and technology,’ explains Sankarrayya. Going overseas might just be another option too, as each of them in the group has leanings towards different foreign shores. Nothing is out of the question, they’ve realised. Maybe it’s rubbing shoulders with the great and the good: Ron Arad, Will Alsop and Ben Kelly are all in the frame. Phase two is partly about reaching a higher level.

AllofUs has reached the point where the group’s protagonists are virtually picking their clients themselves. The group has only lost one pitch to date and at the moment it is turning work down. Is there anyone you wouldn’t work with? ‘Definitely,’ they say in unison. ‘No fags, no booze.’

To see a team so enthused, energetic and effusive about designing is invigorating. ‘If we didn’t have All of Us, we’d all be doing this stuff for ourselves anyway. It’s just what we do,’ says Matthias. Eric Gill once said, ‘My life is my work, my work is my life’. You know it’s happening when you can cite him with conviction. Nick Cristea, project director

Career: Nottingham Trent University, Digit, All of Us

What gives you hope: less packaging and interesting projects

What gives you hope: that one day I might drive a fast car again

What gives you hope: A smile in the street

Career: ID magazine, Digit, All of Us

What gives you hope: My friends’ babies

Career: Moonfish, Digit, Random Media, All of Us

Favourite design: Harry Beck’s Underground map or the Dubonnet posters by AM Cassandre

What gives you hope: belief

The Public – interactive art gallery due for 2007