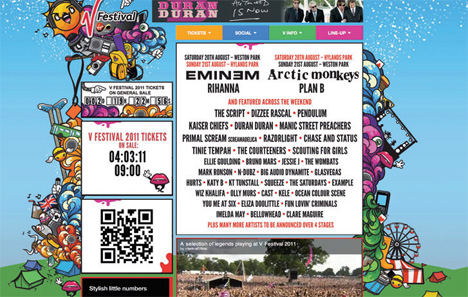 Love has designed a new suite of illustrated visual communications for V Festival as part of a brand refresh, which will roll out in the wake of the festival’s line-up announcement this week.

The consultancy, which designed V Festival’s existing communications, was appointed directly at the end of January and is redesigning everything apart from the identity.

Love managing director Chris Conlan says new social media touchpoints, which the old branding wasn’t designed for, have come into use since the last set of communications was launched in 2005 and refreshed designs will take this development into consideration.

Paul Glossop, head of digital at Metropolis Music, which co-produces V Festival with SJM Concerts and MCD Productions, says an integrated approach is required, in which online can lead offline creative.

Glossop says, ’The online platforms are the biggest portal, which visitors will engage with throughout the year.’

With this in mind Love commissioned Jared Nickerson, lead illustrator from American digital illustration consultancy J Three Concepts, in an effort to capture the personality of V Festival through a series of pictorial icons.

’The variety of entertainment, styles of music and range of people – aged 16-45 – are all part of the broad church of the festival that we felt illustration could capture,’ says Conlan.

Nickerson’s illustrations have been developed in a ’more modular style’, so that they can be reused in different formats across print materials, according to Conlan.

Love account manager Kate Roberts believes the ’flexible’ new look will give the brand longevity and says it will roll out across website and social media platforms in advance of press advertising, tickets, programmes and signage around the festival’s two sites at Hylands Park, Essex, and Weston Park, Staffordshire, between now and the event in August.