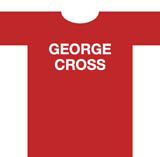 It would be easy to call Bump a graphic design group, but, as Mike Watson, one half of the company insists, ‘We do everything: illustration, film titles, credits, exhibition design and products… we’ll have a go at anything, especially if there’s any money in it.’ The avaricious attitude is undermined by the detail, expense and time the duo put into each project, qualities that have brought them a client list ranging from Tank magazine and the 333 nightclub, to The British Council and watchmaker Patek Philippe.

Bump was started in 1995 by Watson and Jon Morgan, both alumni of the Royal College of Art’s illustration course after degrees in fine art and illustration respectively. It has built up an impressive and incredibly wide-ranging portfolio of work, for clients drawn to the consultancy for its fine sense of irony and an ability to subvert cultural references through everyday objects with wit and intelligence.

From architectural clip art, that replaces unrealistic A-line-skirted sensible women with the more common muggers and drunks, to the ‘basic communication set’ of frustration-venting stickers, the work clearly communicates and resonates. It did with the curator of the Victoria & Albert Museum ceramics department anyway. He kept coming back for more at last year’s exhibition Village FÃªte, at which Bump had set up a china-smashing stall as a comment on the reverential quiet of the museum space.

The piece Bump is creating for Jam continues the tradition of the group producing personal pieces which often end up as client pieces, it has happened with the architectural figures – ‘a challenge would be to see if you could spot the ones used twice,’ jokes Watson – and Bump’s LED T-shirts, which have been bought by on-line artshop Eyestorm.com which intends to be broadened out into a London-wide ad campaign.

For the Barbican, Bump is producing a scaled-down souvenir stall that will ‘sell’ souvenir tat. The tat will consist of T-shirts reading ‘George Cross’, model taxis with painted figures flying over the bonnet, half-mast sandcastle flags, embroidered patches that read ‘tourist trap’.

‘Ultimately, it’s just a bit of a stupid joke. There’ll be people wandering up from the Helmut Newton show downstairs going “What the fuck is this?”,’ says Watson. If they bother to stop and look, I’d bet money they’ll buy a Bump T-shirt rather than a Newton poster.

‘Well, the shop will hopefully sell some of the stuff, if we get round to making it,’ says Morgan.