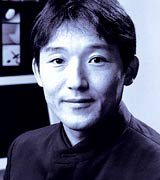 Modern urban life can be stressful. We are faced with long working hours, a myriad of digital communication tools and electrical appliances with excessive functions. Within this increasingly complex scenario, Japanese designer Shinichi Sumikawa’s work is refreshingly geared towards the simplification of life.

Sumikawa was born in Tokyo in 1962 and studied industrial design at Chiba University in the 1980s. After graduating he joined Sony, in the US, as an in-house designer, where he worked on Walkmans and radios. In 1995, Sumikawa left Sony and set off around the world, visiting 55 countries. When he returned to Japan, Sumikawa decided to set up his own design studio in Tokyo. Since then, Sumikawa has worked in different fields, producing designs for consumer products, communication tools and medical equipment.

There is a consistency in Sumikawa’s versatile approach to design. He tries to produce design that speaks for itself; design that indicates the basic function of the objects. In his experience, forms which you feel comfortable with are also those which are easiest use. Sumikawa thinks products on the market today come with too many functions that end up complicating form. This does not mean he is relegating the role of design. Sumikawa challenges our perception of what design is all about.

On his travels, Sumikawa encountered a Peruvian ethnic group which uses banana trees as gravestones. The group believes that the banana tree is where the soul of the dead rests, and that by eating the fruit they are communicating with the spirit of the dead. The sheer beauty of this act impressed Sumikawa. For these people, the monumental shape of a gravestone has no meaning.

On the other hand, in a society saturated with materials and shapes, we tend to overlook the meaning behind the form. In his designs, Sumikawa challenges our preconceptions about forms and tries to give them a new value. An example of this is Sumikawa’s Zero Core for Fuji Photo Film which looks like a portable CD player, but requires no memory devices, such as tape cassettes or CDs. Users can download music directly from the computer.

“I thought it would be dull just to design a cubic container,” says Sumikawa. “I wanted it to attract people’s attention and to surprise them. It would be nice to have electronic equipment that looks like an insect, or some other animal, like cyber robot-dogs. But I did not want the design to be complicated or to confuse the consumers about the function.” His solution was to design a scarab. As life becomes even more controlled by cyber products, Sumikawa looks for inspiration from organic forms.

When Sumikawa designs, he often does not draw sketches. He will start from a block of Styrofoam and with his eyes closed, feel the shape. Sumikawa then cuts away the edges until he comes up with a shape which gives the least stress to the human body.

As a pure form, reduced to the simplest shape, Sumikawa’s shoehorn, Aquarium, shows his concern for ergonomics. Sumikawa didn’t use a computer-aided design program, instead, it was the outcome of continuously reviewing the form by its feel. Aquarium conveys how effective and important the role of the design can be and underlines how mechanics and aesthetics can be integrated into a perfect design.

Traditional Japanese materials are also an inspiration for Sumikawa’s designs. In his Aqua tray for Amano Shikki Corporation, lacquer is used to express the quiet nature and sleekness in the surface of water. The designer has subtly diverted the centre of the ripple to add movement. The project was part of the collaboration between the designer and the local government to stimulate local industry. Lacquer has been historically and traditionally important in the area. Sumikawa used the moist and wet attributes of the lacquer to simulate a rippling effect on the surface of water.

Besides using traditional materials, Sumikawa makes use of the latest technology. In his recent work, the wine rack Casa Rossa for Decora and Building Materials, he used high-pressured laminate. The decorative surface and the strength of this material enabled him to design a “maison for wine”, which would have been less effective if made in rosewood or mahogany.

Sumikawa wanted to give the wine labels their own presence. He came up with the idea of cutting out windows so that the labels can be viewed without taking the bottles from the rack, and at the same time making the design of the label an integral part of the whole wine rack. Sumikawa incorporated a system of lights that illuminate the label from the bottom of each window.

Asked about whom he rates among his contemporaries, Sumikawa replies, “Joe Colombo is no longer alive, but he came up with the most amazing ideas that were far beyond people’s imagination.” Yet Sumikawa is confident about the power of his design work. “Just like a small object can have a ripple effect on its surroundings, I want to design things that will gradually affect the design of interiors, architecture and eventually effect the urban city,” he says.