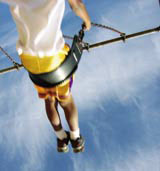 Andy Mueller’s latest project – collating an eclectic range of photographs, by amateurs and professionals – is typical of his unconventional, collaborative approach to design. Liz Farrelly meets the man behind the Camera Club

DRIVE south from Los Angeles airport, blink and you’ll miss Torrance. A blue-collar suburb – essentially a sprawling industrial and retail park – it wouldn’t win any prizes in a civic-centre beauty contest. But with plenty of under-used space and affordable premises, it’s where the (legendary) Girl Skateboard Company has installed its art department, otherwise known as the Art Dump.

Somewhere on the premises you’ll find Andy Mueller, playing table tennis with extreme attitude, in between art-directing Lakai Limited Footwear (Girl’s trainer brand) or designing decks for Chocolate Skateboards (another Girl line). Mueller wears many hats – as a cornerstone of the Art Dump, he regularly collaborates with visiting artists and photographers, among them Evan Hecox, Dan Estabrook and Spike Jonze (Girl’s owner). Projects range from painting murals for skateparks, to group shows of customised wooden dolls (the Girl logo), with outings in Australia, the Netherlands, France and Canada, as well as regular events in and around the burgeoning LA art scene.

Mueller also runs a number of self-initiated businesses – the result of an unconventional career path. Coming to design in the early 1990s, he photographed friends’ bands, documented their music on video and designed sleeves. As those bands were signed, despite no formal design training, he began packaging music for both independent (Thrill Jockey, Dosoto, Mud) and major (Geffen, Capitol, Epic) labels.

Mueller established his own company, Ohio Girl Design, along with its ‘audio alcove’, the Ohio Gold record label, ‘so we could put out our friends’ music’. As a silk screen aficionado, producing T-shirts was an obvious option. Next, he launched a clothing label, The Quiet Life, ‘after lots of conversations about starting a company that was all about creative freedom – no clients, just design’. Initially sold on-line, the twice-yearly collections include bags, badges, hats, sweaters and jackets, and are distributed worldwide. Designs are ironic, jokey and hand-drawn – they knowingly celebrate a retro-tinged, provincial lifestyle, an idealised mid-West youth spent playing ping-pong.

A film about the designer, in the series Western State, by documentary-maker Slowtron, sets out Mueller’s main influences and obsessions as photography, skating, music and packaging. Walking into a record store is, for Mueller, like entering a museum. ‘It’s fascinating to see what people have created,’ he says. On-screen, he flicks through countless posters, flyers and covers that he’s created for bands from Tortoise to C-Clamp, Zinc to Pinebender.

Collaboration is key to Mueller’s working method. One Pinebender release featured a blank notepad and pencil, packaged in a CD case, and the record company ran a competition for fans to design the sleeve. ‘I’ve always liked the idea of other artists, or the audience, getting involved with projects. It’s sort of like being a curator or editor. I think of an idea and then ask people, and try to keep it open to the public. It’s fun to see what comes in,’ he says. Never without a camera himself, Mueller has dedicated a space on The Quiet Life website to a Camera Club, inviting submissions from all site visitors. ‘The response was so overwhelming,’ he says. ‘I can’t believe how many people have submitted photos. The images were so amazing that I thought about putting out a book, showcasing some of the submitted photos.’ The Quiet Life Camera Club/ Volume One, was launched this month, with an exhibition, where over 400 visitors created a massive photo-wall on the opening night.

Asked if there is a difference between selecting photos for the website and for a book, Mueller says no. ‘For the website, I go through all the submissions, pick 20 at a time that grab my attention and put them on-line. I don’t over-think it. The difference with the book, is that it has more of a pace to it, so it flows together. My wife, Jennifer Pitt, edited the book, then I gave some suggestions,’ he says.

With images varying from digital snapshots to staged set-ups shot on large-format cameras, coming from far and wide, the Camera Club offers a unique forum. Unpretentious, but accomplished, amateur and professional, the images speak as much about the possibilities of photography as about the contributors’ lives and loves. A visual treat, it’s also another example of Mueller’s lateral approach to both his career and the creative process. •

The Quiet Life Camera Club: Volume One book is available to buy on-line at www.thequietlife.com, priced $20 (£11)