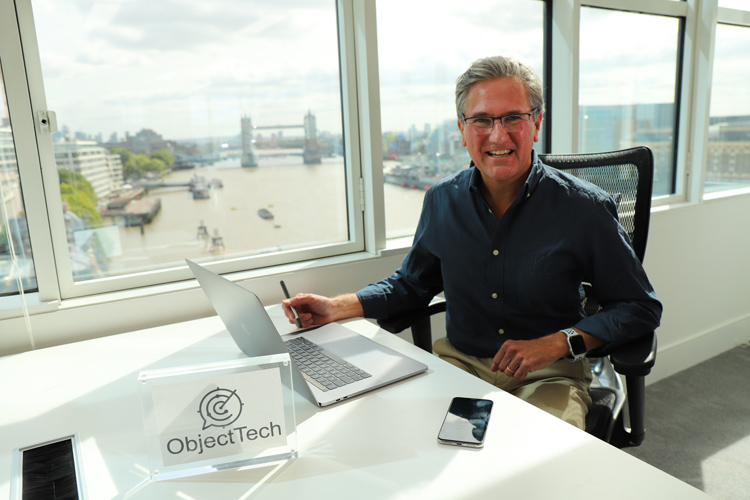 Clive Grinyer has joined start-up ObjectTech Group after leaving his role as director of service design for Barclays bank.

ObjectTech is behind digital identity “lockers” which will be used at airport border controls to allow “seamless” travel, according to ObjectTech.

Grinyer will take on the role of creative director, new products and service design. He will work on the development of several “high-profile” digital identity projects, as well as helping the company “evolve their design capability.”

“Digital identity is something that has been very interesting and relevant to me for a long time especially at Barclays,” says Grinyer.

ObjectTech’s digital passport systems aim to make the process of getting through borders quicker and more secure, according to the company.

Using biometric data including facial recognition which is linked to passport data, it aims to make the whole process, from buying tickets to passing airport security checks, faster and smoother, reducing queues and removing the need for “slow human decision-making processes” at borders.

“To work with such an exciting bit of technology and combine with it the human element to ensure the experience is seamless… that seems to me like one of the most exciting design challenges in the world,” Grinyer says.

“I am here bringing in designers to become the world’s best digital identity design team – we know all aspects from brand to the customer experience are important to get right.
He says his role will involve “helping ObjectTech to answer the difficult questions,” he says.

“Such as why are we doing this? What is the problem we are solving? How are we talking about it? How do we use this technology to make real impact and benefit people? We have to talk about this shift in data and address things like trust and understand how people see that.”

On the project with Duabi airport, Grinyer says: “It is vitally important when they are looking after 20 million passengers a month. Having to process that number of customers… you can imagine if Heathrow had to do that with current passport arrangements,” he says.

“Dubai is incredibly forward looking they are investing in the future. The project will go live in 2020 so now is the time to work out what will it will feel like as a passenger. We have to create an excellent experience. We are at that point in the project to shape and form that.”

“It is really starting with people, we need to understand what that journey is like… it is fascinating to put ourselves in the shoes of the incredibly diverse group of people who will be experiencing this.

“What are they doing? Why are they going to Dubai? Is it business, a holiday or just changing planes?”

The technology itself uses a selection of biometric data including facial recognition. “There will be cameras at key locations, so the technology will do the work in the background,” he says.

The system is set to be used at “hub” airports, with Dubai as the first, but Grinyer did not reveal where it could be expected to appear next.

Taking back control of data

In terms of data, he says we currently live in a world where it is stored by technology giants and other companies and that currently data leaks can happen.

“The technology that is being developed will mean these leakages won’t happen anymore. The data is yours and only you can decide when and where you want to share it.”

This was the reasoning behind the term “digital identity locker” – “The data is yours, it is something that you can put a lock on,” he explains.

As a tutor at the Royal College of Art, he is also keen to get students to help on the project.

“We are very keen to bring students into the company and work with them because they provide a completely different approach. They are the most worried and the most creative in working round the problems with data.”

He adds: “Data is a powerful tool, we need to design it to be under our control, not in the possession of others.”

“ObjectTech are increasing security whilst giving people back control of their identity so they can benefit from the next generation of seamless experiences.

He said there was “a very clear recognition” of design and technology working together at the company, which is something he says he has been involved in for a long time, dating back to his days with Samsung and Orange.

“How can we make technology work for people? We know tech doesn’t always work for people,” he says. “To come to a place where there is a real desire to get that right and to essentially have a blank piece of paper, is every designer’s dream.”

Grinyer’s former role leading a service design team at Barclays aimed to improve the experience of the bank’s customers using design. His has previously lead design teams at Cisco and Samsung, worked with Orange and co-founded the Tangerine product design consultancy. He is also a tutor at the Royal College of Art.

ObjectTech also develops digital ID systems for other sectors such as helping businesses comply with GDPR regulations, helping refugees to access services, and in banking and finance sectors.

What to see at this year’s London Design Biennale 2018