Helsinki has long been a place with a rich art and design offering, from the architectural works of Alvar Aalto which fill the city, to Helsinki Design Week which prides itself on being the “largest design festival in the Nordic countries”.

Now the new Amos Rex museum, which opened on 30 August, brings a new reason for art and design fans to flock to the Finnish capital.

The subterranean art space bubbles out of the ground in a newly landscaped public square in the centre of the city.

It offers a space for experimental work, such as the opening exhibition – an immersive, colourful, digital installation by international art collective TeamLab – as well as for modernist and classical art.

Its predecessor was the Amos Anderson Art Museum which held the art collection of Amos Anderson, a collector, philanthropist and entrepreneur.

JKMM Architects, a 100-strong team of designers and architects based in Helsinki took on the challenge of creating a new, “flexible” space for the art museum to continue.

From 1965 to 2017, the museum was situated close by at Yrjönkatu in Helsinki city centre, in a building dating back to 1913, that was once Amos Anderson’s home. But the building became too small and inconvenient for plans to expand further, according to JKMM, so the museum was to move.

The €50 million (£45 million) project has been funded by Konstsamfundet, the organisation set up in 1940 in support of the arts by Amos Anderson. JKMM was appointed to take on the project in 2013 and began work on the site in January 2016.

It was decided that most of the museum would be situated underground, with a series of white domed skylights bubbling up into the Lasipalatsi Square. It is set in a historic and culturally significant area, with the Parliament building and the Kiasma Museum nearby.

The entrance to the Amos Rex is through the Lasipalatsi, a Functionalist, glass-walled pavilion dating back to 1936, containing the BioRex cinema, shops and restaurants.

Freja Ståhlberg-Aalto, project architect at JKMM, says: “The old Lasipalati building is a very important monument of Finnish architecture. We realised quite early on that a new contemporary museum could not be placed into the old modernist building – it would destroy it.

“The new gallery spaces needed to be quite large with high spaces and at the same time we didn’t want to go very deep beneath the square as we thought the user experience should be as light and pleasant as possible.

“The dome shapes were both technically and spatially very suitable for the exhibition spaces.”

A 6,230 square metre building was designed below ground, with the highest skylight above the largest exhibition room reaching 9.45 metres in height.

The five domes, which form a key feature of the museum, are made of white reinforced, light-coloured concrete slabs in geometric shapes, set out in circles and ovals, rising into sloped hills and topped with skylights made of steel and glass.

Outside, they form a new landscape for the public to enjoy, Ståhlberg-Aalto adds. “We wanted to create a new urban space where people could meet and spontaneously do different things, have a picnic or just hang out.”

The architect adds that although the museum is underground, “it doesn’t want to hide” – the domes which “bubble up” help to create a “dialogue” with the more historic elements in the square.

The skylights also allow daylight into the subterranean gallery spaces, as well as letting visitors catch a glimpse into the museum from outside, and vice versa. 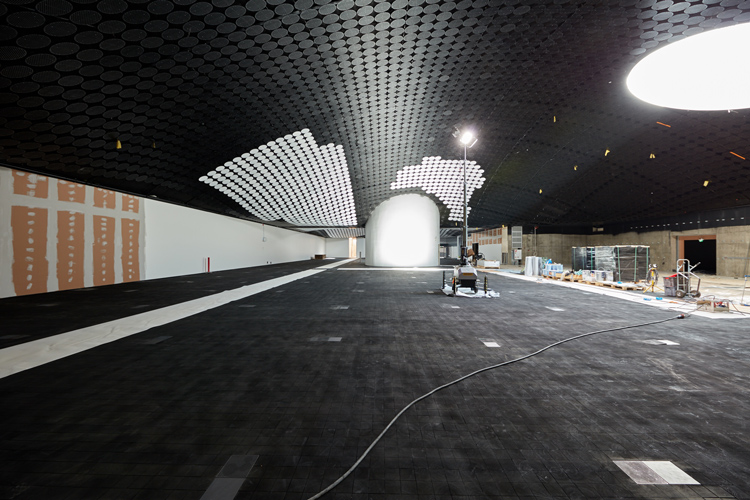 The architects have created column-free exhibition rooms that aim to be versatile and flexible, says JKMM.

The museum has two floors below ground and two floors above ground, as well as the floor of the BioRex, each connected by staircases and lifts.

JKMM interiors architect, Päivi Meuronen, says the two parts of the museum, above and below ground are like “two different worlds”.

She says much of the work involved restoring the interiors of Lasipalatsi, which was initially built as a temporary structure in 1936 with the intention of being torn down. But decades passed, and it never was, instead becoming a protected building.

“The glass palace is unique and one of a kind in Finland so we preserved everything we could,” she says. “Over the years it has fallen into bad condition.”

The name “Lasipalatsi” – which means “glass palace” – suggests the new building should be “transparent” and “open”, with daylight coming in, Meuronen says, so the rebuild work aimed to restore this atmosphere.

Many of the rubber floors, which were renovated 20 years ago, have been kept, with new parts added in a similar style. One portion of original hexagonal tiling has also been kept.

While the upper levels have been inspired by the original architecture of the Lasipalatsi, as visitors head downstairs, walking through the shop to do so, it all changes – the architecture becomes “totally modern”, “abstract” and “minimalist” according to Meuronen.

Visitors enter a large, wide lobby, with white interiors. “Our architects say this should be a space where you empty your mind and senses and prepare for the art,” Meuronen says.

There is a light across the entire lobby ceiling that is designed to imitate daylight, with light that changes “like clouds are moving across the sky”.

The museum has two main, dome-topped exhibition rooms, which are left mainly empty.

“The interiors can’t be too tricky as other people might think they are art pieces,” Meuronen says. “It has to be a background to the art”.

The larger exhibition hall will mainly be used for temporary exhibitions. It has a pipe in the middle and can be split into two spaces.

Another, smaller exhibition hall will be home to the museum’s permanent display, which includes a post-impressionist art collection owned by the Sigurd Frosterus Foundation. It has been on deposit at the Amos Anderson Art Museum for nearly 25 years.

There is a third room that will mainly be used for art workshops and education but can also be used as an exhibition space.

Some changes have been made to the “traditional” BioRex cinema, which inspired the name of the museum itself. To make the space more multifunctional, three rows of seats have been removed so a stage could be added.

Temporary walls have been put up and black fabric covers a roof light to provide the darkened backdrop for the exhibits, which are a series of colourful, digital projections.

Meuronen describes one of the works, which has been designed to work with the architecture of the dome. “It looks like water which slowly moves around the roof light. It looks a bit like a black hole. It is quite impressive,” she says.

Other exhibits include a colourful interactive space filled with digital images of animals that visitors draw themselves, as well as plants, which change based on the movements of visitors.

“Flowers bloom if you stand still, but will disperse if you work around,” says TeamLab. “Butterflies increase in places where there are flowers and crocodiles die if they are stepped on too much.”